Many of us are looking at the recent cool pattern as a possible signal for a cold winter. This isn’t always the case, but in the current setup it is certainly possible this year. Please keep in mind that forecasts are not exact, but they serve as general overall idea as to what will likely happen. Also long-range forecasts are given with some degree of uncertainty. With that said, there can be some history gleaned with El Nino and what the winter was like during one of the events. Recently, sea surface temperatures in the Equatorial Pacific have only been slightly warm, or above average. We have been in a neutral to weak El Nino. That is right now. But what is the forecast leading into the winter?

Here is the ENSO forecast from IRI, which shows a bunch of different forecast scenarios and each possible outcome for an El Nino. Most of the models have backed off on the idea of a strong El Nino. Most of the models are clustering around 0.5 which would mean a weak-to-moderate El Nino. The black dot is the last observed El Nino anomaly, which as less than 0.5 which would be a very weak El Nino with a warm bias. But what does this mean for the long-range into winter?

I looked up previous winters that had a weak El Nino, and dug up some numbers and plots from previous years. Good news for cold lovers, because previous years where there was a weak El Nino, we saw below normal temperatures. Below normal temperatures were seen from Montana to Florida to the Mid-Atlantic. This could spell trouble for the orange groves in Florida if the weak El Nino continues into the winter. This would mean bitter cold air spilling into the Deep South for most of the winter. Below is the plot of temperature departures from normal from December to March using the 1950-1995 longterm average. Very cold in the East with a weak El Nino. 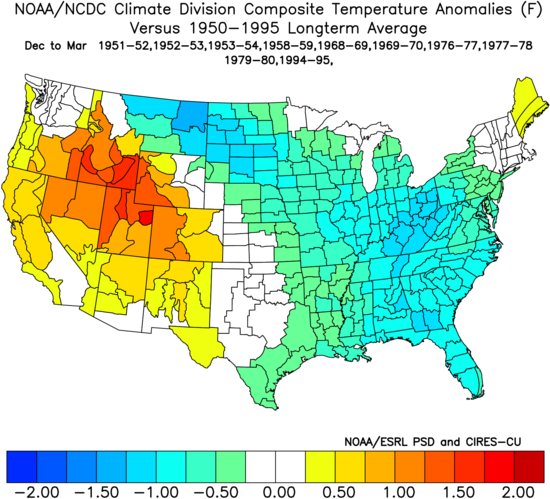 However, using the same data, we might not be giving good news to snow lovers. Since the below plot shows precipitation departure from normal, it doesn’t look impressive. It looks rather dry along the Appalachians, and not overly wet along the coast, with possibly the exception being Florida and the Carolinas. This could mean snow for the Carolinas and New England, but likely only rain for coastal locations, including Florida. In California, we could be looking at a very, very wet and warm winter if this pattern continues. 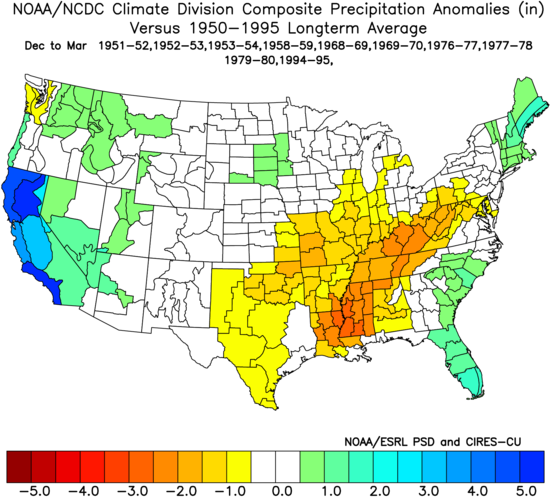 The below image shows and overall pattern that could develop this winter if the El Nino remains in a weak to moderate phase. Although I’m thinking the image is more like a moderate El Nino. The jet stream splits, and re-combines along the East Coast, thus favoring coastal storms which would turn out to be snow storms from DC and north. Very wet across the Southeast. If it was a moderate El Nino, then we can expect to see a busy winter, but mainly in the Northeast. Not so much the South as everything would be rain. A weak El Nino would be the South’s best bet at having a snowy winter. 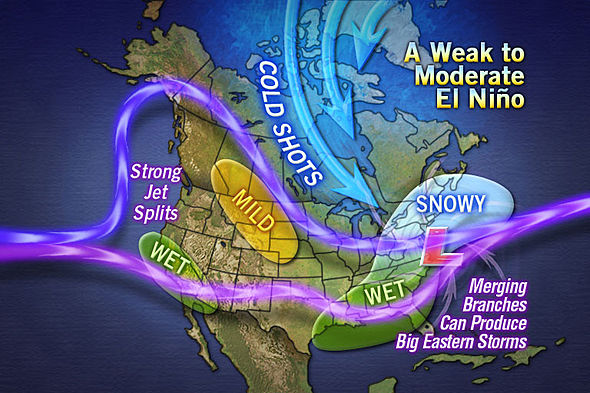 One year where we had a moderate El Nino was 2009-2010, and that was the season with multiple blizzards. “Snowmaggedon” happened in Maryland and DC during this winter. Late December and February were very busy months for snowstorms. Below is the temperature departure from normal for that winter, and it was during a moderate El Nino. The South was cold but the Northeast was warm.

Either way, this winter looks much more cold and snowier than our previous winter. Comment below and let us know your thoughts! And please share this article with your friends! 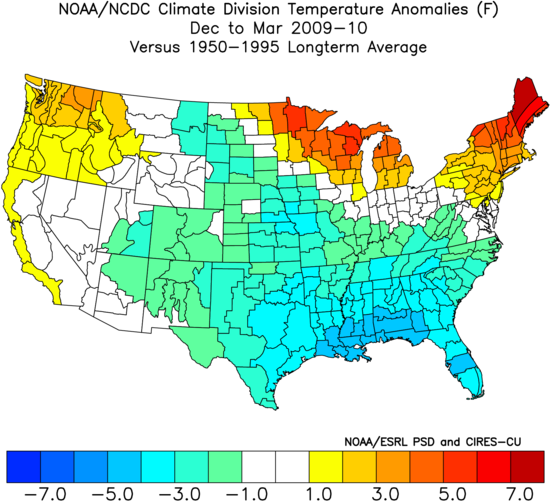 Check Out Our Other Recent Posts!