As we have seen multiple 80 degree + days so far in the month of March, and even some near record highs, this trend will not slow down anytime soon. We are expected to have many more warm days this spring, and some days may even be hot as we approach late May. Last year we had a record heatwave in late May, where high temperatures soared into the upper 90s.

As temperatures will climb to above average this spring, expect the things that come with warm weather, such as frequent grass cutting plus other outside work. It may be a good idea to get your air conditioning systems tuned up, since many repair companies will start to get swamped with service calls later this spring. You don’t want to be without a/c for the first heatwave, when it hits!

NOAA’s April, May, June outlook for temperature probabilities is out, and is shown below. 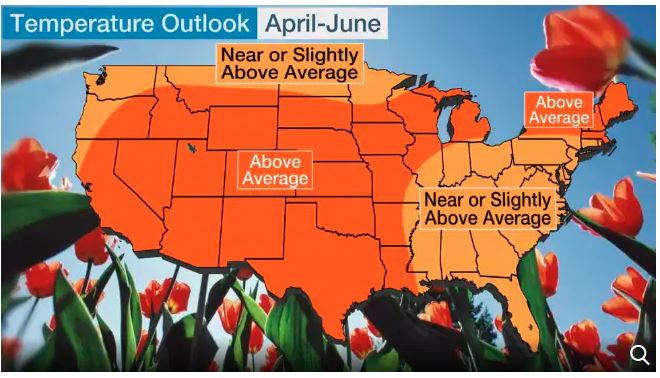 If you own an outdoor business, this could be good as grass will grow and the demand for yard and property work will increase. Also, construction projects will be on the upswing.

The only downside to this would be an increased energy demand due to the heat, which would drive up many power bills due to increased a/c usage. On the bright side, rain is not expected to be excessive as in previous springs. That would mean drought conditions by late summer, however confidence is still very low since that is still some time away.

Stay tuned as we will keep you updated on seasonal outlooks!