The National Oceanic and Atmospheric Administration (NOAA) released their outlook for the upcoming hurricane season for the Atlantic earlier today and the forecast certainly warrants concern for the eastern half of the nation. 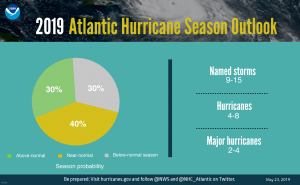 The reasoning behind NOAA’s forecast for a more average season than an above-average one, is due to the presence of El Nino and it’s role in preventing the overall increase in hurricane activity going forward into the upcoming season. The counterbalance however, lies in the warmer than normal sea surface temperatures that reside in the tropical Atlantic basin and Caribbean Sea, as well as enhanced monsoonal activity in West Africa. This will likely keep our Atlantic hurricane season from being as hushed as El Nino would normally enforce.

This outlook from NOAA is not a landfall forecast, yet a general summary of what can be expected for seasonal activity. Make sure you, your family, and your friends have made all necessary preparations for the upcoming season, particularly if you live in or near a coastal area, as we here at East Coast Weather Authority will be monitoring the Atlantic very closely in the coming months and will provide you with the latest information and significant alerts regarding any storm landfalls or various impacts to coastal and inland areas should any tropical disturbances or hurricanes threaten the Eastern US.

Lastly, here’s a look at the names for the Atlantic tropical cyclones for this upcoming season: 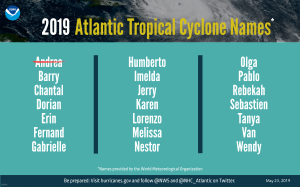