Storm is on the way and here is our snowfall map. We will go over the tough regions and what could be a bust for some regions, so let me show you what we came up with. 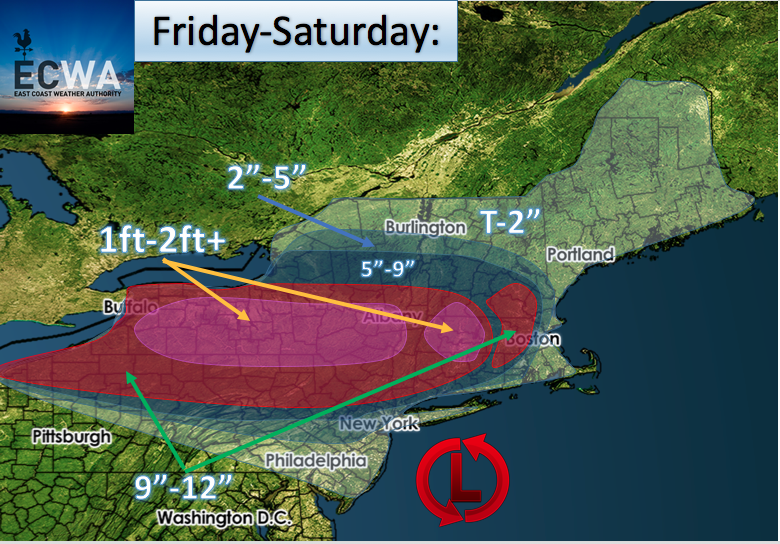 Widespread area of upwards to a foot and even 2 feet with locally higher amounts. Tough areas include Hudson Valley, NYC, Boston and most of New England. Models have been trending colder over the past few days which is why we have upwards to a foot for most of the Hudson Valley and areas west of Boston. For NYC, the area is tough not much cold air is dragged into the area until the storm decides to pull out which is understandable, but we thin enough cold air will make it into NYC to bring 2″-5″. Another tough area is Boston, this area is very tough for the same reason as NYC, not enough cold air dragged in until it decides to pull out. When the rain decides to change over though it will be heavy which is why we are thinking around 2″-4″. Finally, the higher elevations of western New England can see upwards to 2 feet+ because of the extra cold air that will be in place to to the elevation and the strong uplifting of air creating heavier snowfall rates.

With every forecast there is bust potential and the areas that could see a bust are NYC and the Hudson Valley. By bust in this case we mean heavier snow then is forecasted, NAM still has upwards to 2 feet for the Hudson Valley with 4″/hr bands making their way into the region, and with the storm basically stalling those bands will sit over that area for hours. NYC is the same deal, they can see much more then 5″ if the cold air gets dragged and the storm stalls. We are very confident in this forecast, but heavier snow totals are possible in many areas. Stay safe, because this storm does not only have a threat for heavy snow, but power outages especially along the coast with tropical storm/hurricane force wind gust expected!