A powerful Arctic cold front will move in from our west on Christmas Eve, but ahead of is could be some rotating supercell thunderstorms, which means the possibility of tornadoes in the eastern Carolinas and southeast Virginia. Folks in this areas should remain on high alert for any threatening storms, and have a source for warnings from the NWS.

Isolated supercell thunderstorms will be ahead of the front during the afternoon on Thursday, and will move from south to north. Futurecast radar shows the activity beginning anytime between 3 and 7pm. The cells in eastern NC are the severe threat. 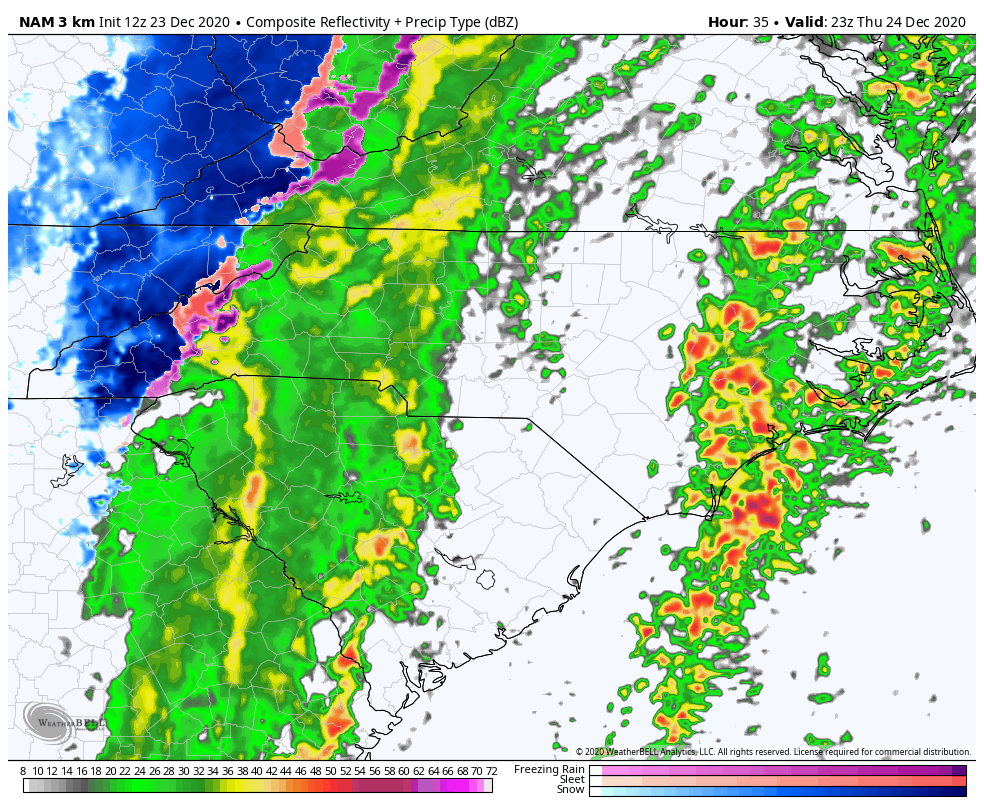 Then the cold front moves through, brining with it heavy rains and high winds which could be damaging. Power outages are possible anywhere in the Carolinas as this front moves through, so make sure your phones are charged. The blue streaks are flurries as colder air moves in. This is tomorrow night. 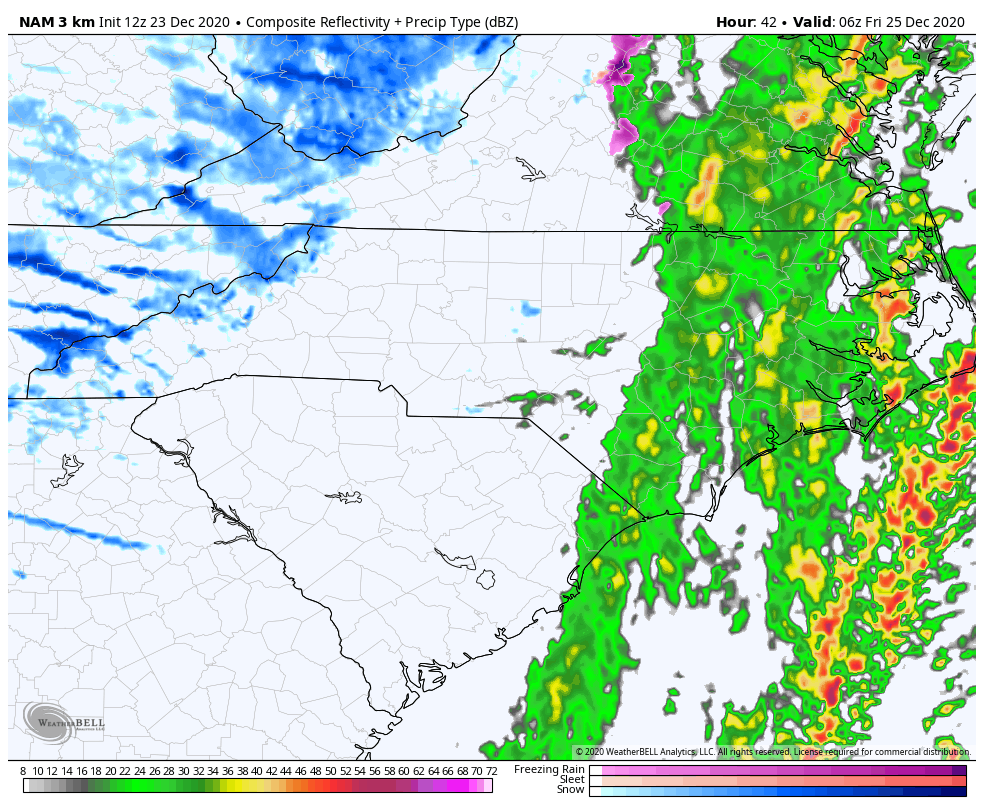 The graphic below shows what areas will see storms and snow. The legend is below the map describing what you can expect for your area. 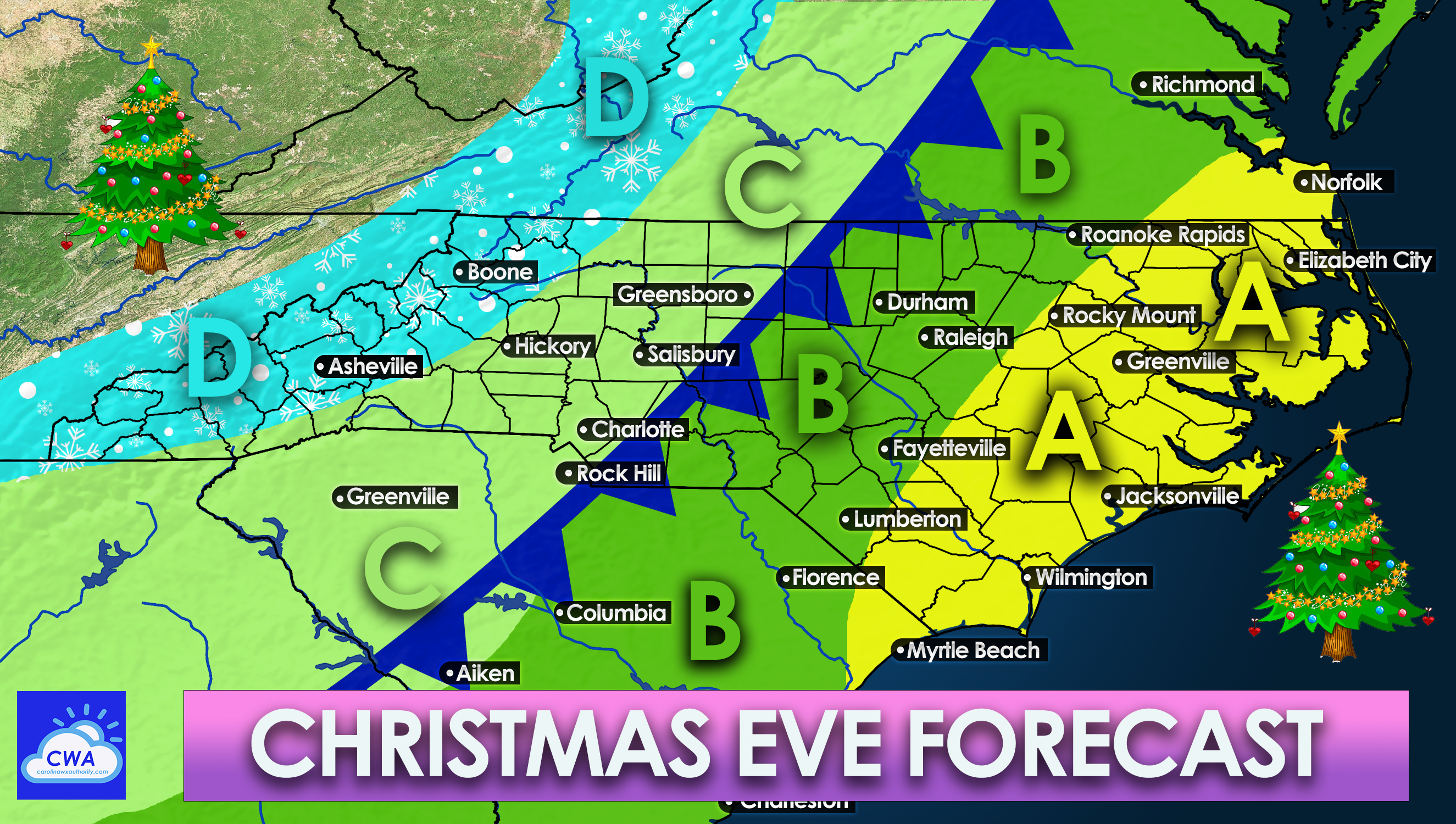 AREA A: This area has the highest risk for severe storms including tornadoes. Residents in this area should be on alert and have a way to receiving warnings from the NWS tomorrow at any given time. Windy conditions will accompany the front along with heavy rains after the initial severe threat.
AREA B: There is a marginal chances for severe storms, and a random tornado cannot be ruled out. It will turn windy with heavy rain as the front moves through. Scattered power outages are likely.
AREA C: There is a chance for a storm or two, but this will mainly be a squall line. High winds will accompany the front causing scattered power outages.
AREA D: After the front moves through, snow is possible as colder air rushes in. It will also be windy. Snow could fall in the form of flurries to several inches in the higher elevations.

For everyone involved, this will be a strong cold front brining high winds and heavy rains, along with power outages. Remain weather aware on Christmas Eve tomorrow! We will post radar updates as needed.