Welcome to your 2019/2020 winter outlook here at Carolina Weather Authority! Last year was a big-let down since many were forecasting cold, and it ended up being warm across the board. We were also on that bandwagon. However, MULTIPLE sources this year are pointing to ABOVE AVERAGE snow and ice for much of NC and down into GA and up into VA. Even the Midlands of SC and into eastern NC could see an uptick in wintry precip this year.

An active southern storm track is expected this winter as we will be in a neutral ENSO phase or even a slight El Nino. This is better than an all out strong El Nino if you are a snow lover, since we want to be near neutral for winter storms. While it might not be extremely cold overall, it will be active. What we don’t want is a strong La Nina or El Nino since that would either mean warm and wet or warm and dry conditions.

Overall an above-average trend in snow and ice can be expected this season. This will be due to an active southern storm track. Closer to the coast and to the southeast it will be warmer, so more rain events will occur than snow. But it won’t take much to wrap in cold air behind these systems, and parts of the Midlands and Coastal Plain could see an uptick in wintry events this year. From Atlanta to Charlotte and up to Richmond we can expect and active winter with above-average snow and ice amounts. The mountains will have us beat as most of the cold air will be locked in place. 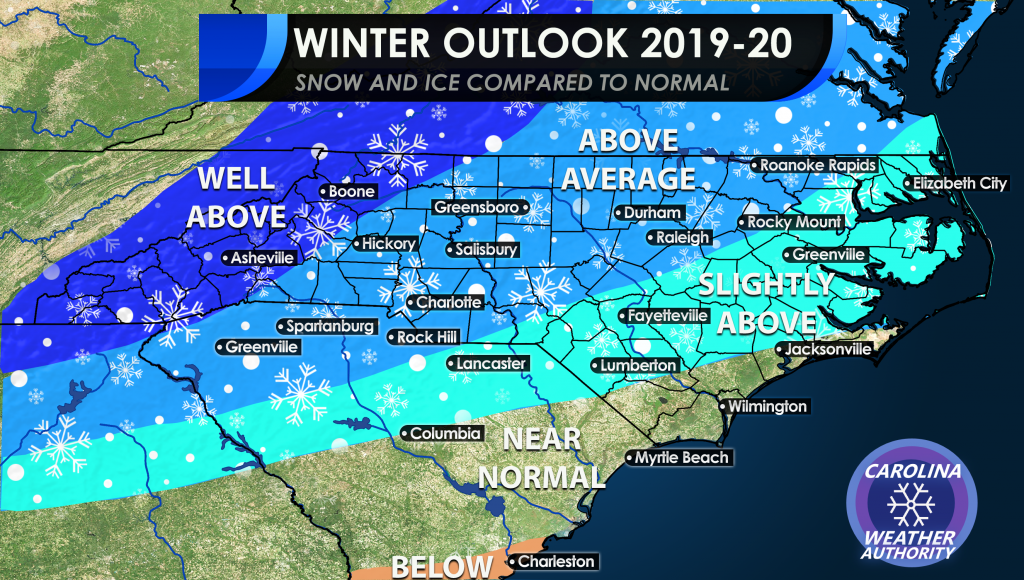 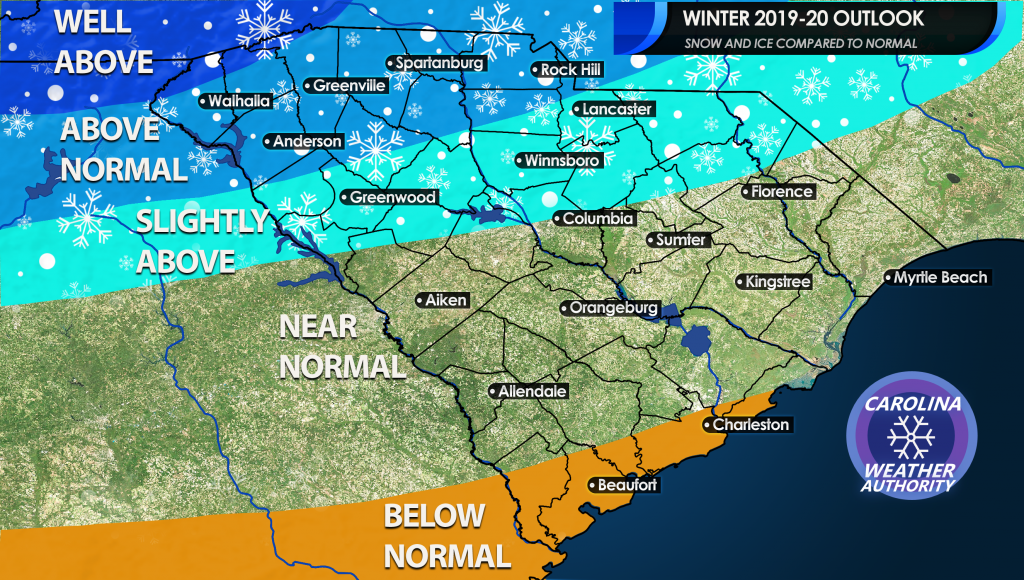 Again we are not expecting a bitter cold winter, and for some this is good news since you don’t want it to be cold and dry for snow. You actually want mild overall since storm systems feed off the differences between cold and warm air. Much of central NC and the upstate of SC and VA/GA could see near normal to slightly above normal temperatures overall. The Coastal Plain will most likely see above-normal temperatures as they will be in the warm sector of these storms. But that does not mean no snow or ice.

The mountains will see the coldest air but not crazy cold. Temperatures will only range slightly below normal.

There could be some bitter cold days and especially nights as a storm exits and pulls in colder air. However the cold isn’t expected to linger and temperatures should moderate fairly quickly. 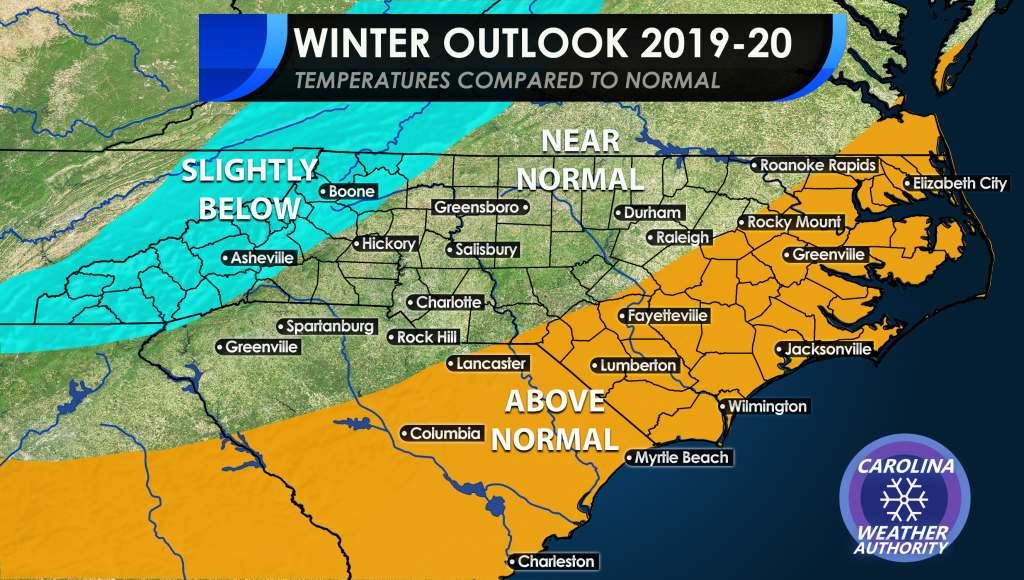 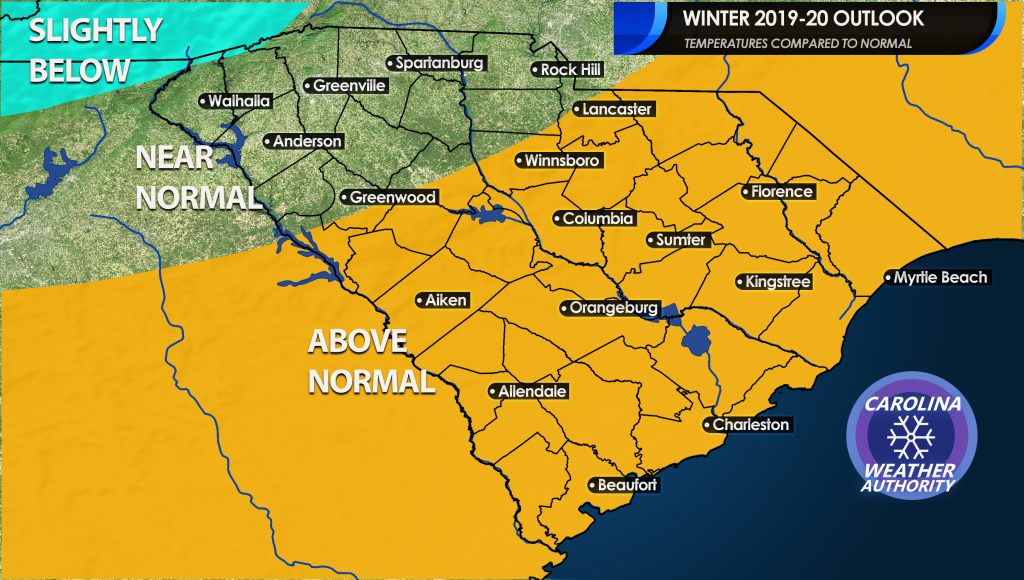 What is the reasoning behind this forecast? It is due to the ENSO trending towards a neutral or “La Nada” winter, where there’s no El Nino or La Nina. These winters have proven to be especially active in the Southeast.

The graph below from IRI and the CPC indicates a close to neutral or even a slight El Nino. Even if there will be a slight El Nino, this would still favor an active southern storm track. Either or is favorable for snow in the Southeast. However, ENSO forecasts are not the only factor in deciding a winter outlook. 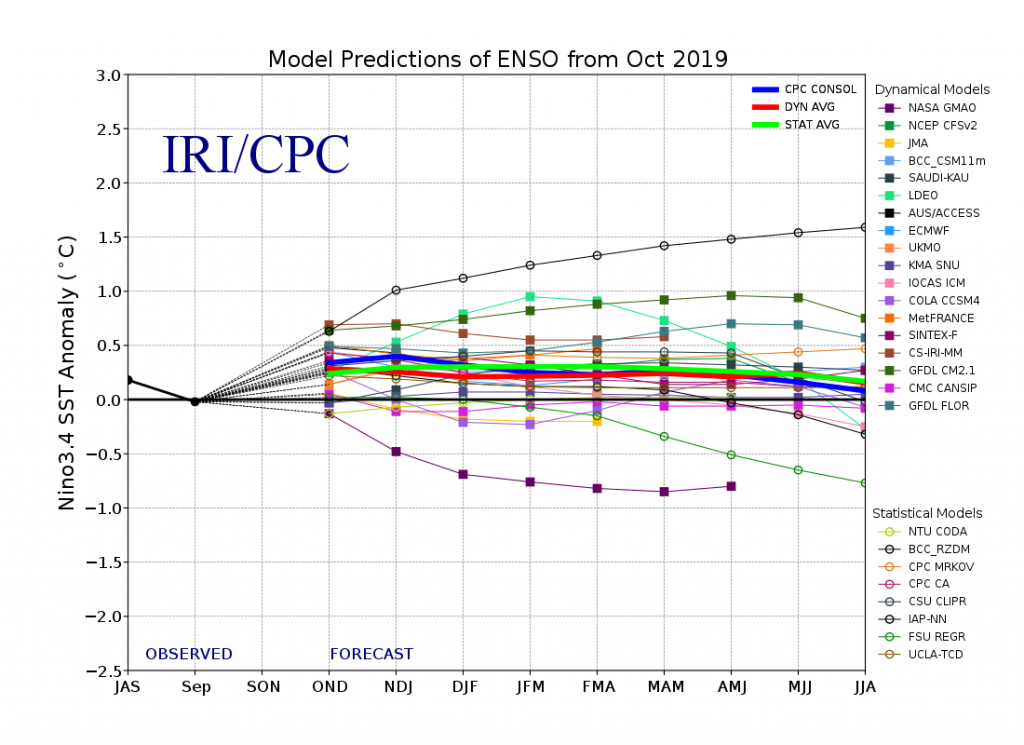 Another factor is sea surface temperatures (SSTs) anomalies. Notice the large area of warm water south of Alaska. This would favor a positive PNA for much of the winter if that water stays warm. This means a ridge out west and that in turn would cause a trough or dip in the jet stream along the East Coast. This dip in the jet stream combined with the southern jet would allow for coastal storms to form off the Southeast Coast, and also for disturbances to make their way across the Southeast.

Also, there is slightly warmer than normal waters just off the East Coast due to a hot summer and a late-season heatwave. The summer in the Southeast started early this year in late May with temperatures already in the upper 90s. This trend lasted into October where we saw triple digits which was unprecedented for so late in the season. These warm waters will act as fuel for any coastal storms. We just saw a powerful nor’easter form recently. 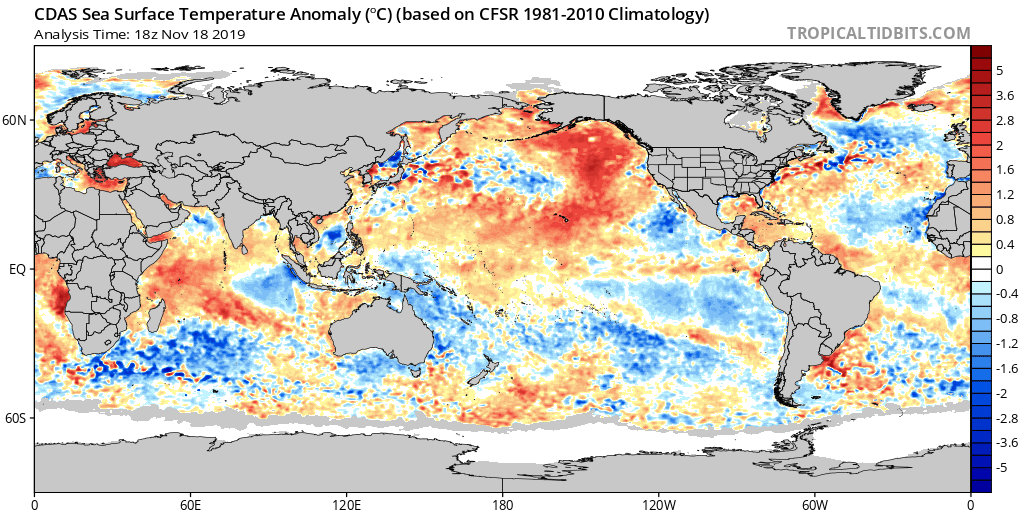 This winter could be a hybrid of a Neutral and slight El Nino pattern. In a neutral pattern, the East Coast gets blasted with snow and cold, and also ice. Very cold and snowy winters have occurred in neutral patterns. The Southeast is typically warm and wet in these patterns, but active. This is why we are not expecting a bitter cold winter in the Southeast. However both jet streams will cause above normal storm activity as they will carry the disturbances needed for storms.

Combine the above with a the below, but only with small adjustments. Both have a common theme, which is an active southern jet stream. This would spell a wet active winter for the Southeast. Not every storm will be snow as some will be rain in between. But in order to have above-average snow and ice chances in the Southeast, we need an active storm track which we should have this year. It won’t take much for a strong southern storm system to pull in colder air needed for snow and ice. 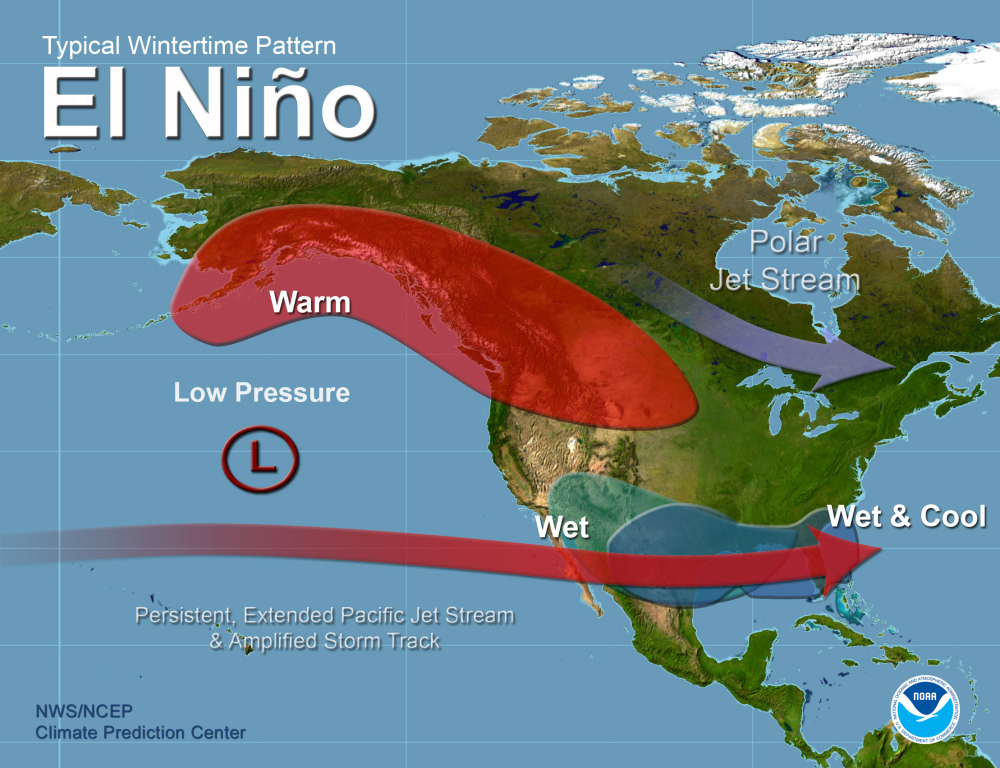 Buckle up because we could be in for a ride!

Please share using the buttons below to inform your family and friends!