Hey everyone. Just wanted to take a moment away from Facebook to discuss my thoughts on the upcoming summer and even hurricane season for our members only. Well, first of all, you probably know that it will get hot out next week, but then we will cool off once again to end the month of May. I’m not allowed to post the Euro weeklies due to terms with the owner of the subscription model suite, weather bell analytics.

Some of the models including the Canadian weeklies build a ridge in the West into mid-June, which would in turn create a trough and thus cooler weather in the East. This is in fair agreement with the Euro weeklies. There is no pronounced ridge or heatwave evident through the first week of June.

What we have as of May 3rd in the Pacific is a neutral El-nino:

Neutal El-Ninos typically signal a cooler and wetter than usual summer. And the good news is, if you’re a snow lover, there comes the higher likelihood of big east coast snowstorms. Such as what we saw in the winter of 2009-2010. There was “Snowmaggedon” in Maryland and DC. Also there was some decent big storms other than that one. That is what this winter I think will be similar to.

Could you image that if I posted that thought on Facebook?

Here is the winter pattern during a weak to moderate El-Nino, which where I think we will be by the time winter starts: 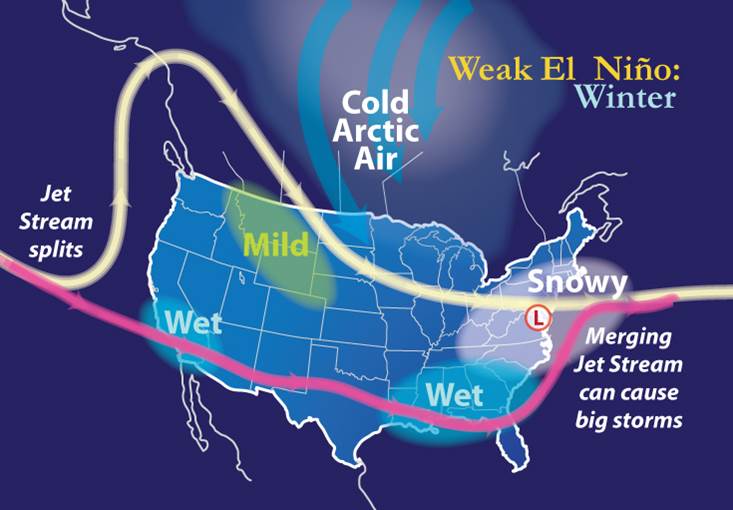 As we stand now, these are my thoughts: a cooler and wetter than usual summer, and then winter gets cranking before Christmas! Comment below for your thoughts, or jump over to our premium forum.