Well, I do have some good news for the cold and snow lovers. This coming weekend will certainly be cold. We are looking at single digits in the mountains of PA and New England for lows. This cold air will spill down into the Carolinas, and while not quite as cold, the sting will still be felt. But some are asking, what about November and into December and when will the first flakes fly for you location? That is hard to pinpoint, but I do know this: there will be flakes in the mountains this weekend behind a very cold shot of air for this time of year. 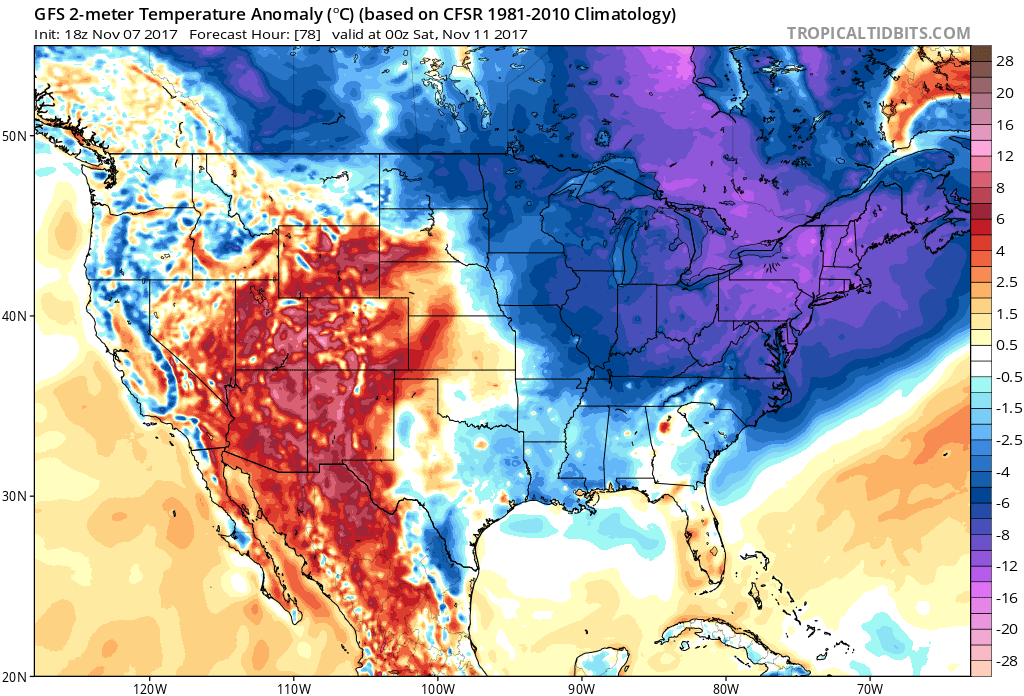 Now what about the rest of November? We are expecting a warmup after this weekend’s cold event. This warmup will not last long though, as another shot of cold air will blast out of Canada and cover the East Coast. The GEFS ensembles are showing support for a below normal second half of November. Cold air appears to be funneled down from Alaska and the Yukon Territory. If this pattern keeps up, we could be in for a very cold start to December.

The cold looks to last into the week of Thanksgiving. All that blue is cold air. This could be a trough pattern setting up in the East into the second half of November. And with trough patterns, come coastal lows. I would not be surprised if some kind of coastal low developed off the Coast and actually brought some inland snow.

Here’s the bigger picture below normal temps for around the 21st/22nd:

The Arctic Oscillation Index, or AI, is projected by the European model to go way negative. This is a favorable set up for blocking, where high pressure is over Greenland. That favors coastal lows for the East and cold also. Stay tuned as the models will be bringing in new data!