We are entering a month of of the year where derechos are actually quite common as the upper-air patterns favor bow segments of damaging thunderstorms. An MCS or mesoscale convective system is basically a fancy term for the word derecho, which is a fast-moving line of thunderstorms with extremely high straight-line damaging winds.

This typically occurs during a heatwave such as the one that we will be having later this week. Also, the more intense the heatwave the more intense the Derecho it seems. One of the last major ones was the North American Derecho of 2012, that started in the Midwest and plowed through Washington, DC, and made it all the way to the coast. Millions were without power and sustained considerable damage from the winds.

Below is a radar snapshot from the evening of June 29th, 2012. I was living in DC at the time and remember it, as me and a friend on my floor went onto the roof of our apartment building! 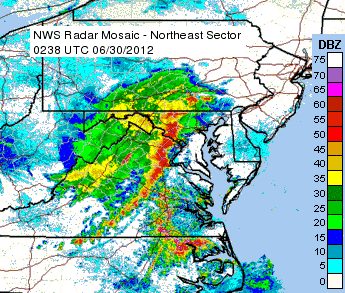 The upper-air patterns will be favorable this week at some point for another MCS to move through, perhaps in Virginia and the northern part of NC. The severity of the potential system is not yet known. The models rarely show these rare systems well in advance. Therefore, keep up to date on the conditions during this week, as storms could be possible on any given day past Monday.

As of now, we are NOT saying this IS going to happen, just that the upper-air pattern will become favorable for a localized event in VA or NC.