Monster Hurricane Eta is closing in on striking the coast of Nicaragua as a powerful Category 4 hurricane. The storm rapidly intensified from a central Caribbean tropical disturbance at the end of last week to nearly a Category 5 hurricane last night, peaking in intensity with winds of 150-155 mph, perhaps even stronger in between hurricane hunter aircraft eyewall measurements last night. This makes Eta one of the strongest November hurricanes on record, and one of the strongest storms so far south in the Atlantic basin. This season ties 2005 as having the most named storms on record, and that record could fall later this month.

While Eta likely has weakened a bit since last night, it will still bring a devastating wind field, storm surge, and flooding rainfall to coastal locations in central and northern Nicaragua felt very rarely in this part of the world. Only Hurricane Felix in September 2007 was stronger at landfall. The storm will move inland and weaken quickly tonight, becoming a tropical depression later tomorrow as it moves west towards Honduras. Flooding rainfall and catastrophic landslides will threaten thousands of residents in Nicaragua, Honduras, El Salvador, Guatemala, southeastern Mexico, and southern Belize through the end of the week as rainfall may total in feet in higher elevations.

Forecast guidance is in good agreement that the remnant low of Eta will turn northeast and gradually reorganize over the warm northwestern Caribbean Sea Friday and especially this weekend as a weakness in a large region of high pressure stretching from Mexico to the Eastern U.S. tugs the storm northeastward. That will allow the storm to potentially reintensify to at least tropical storm strength. Some of the operational runs of the European model yesterday called for rapid intensification south of Cuba early next week, but uncertainty of that happening is high. Cuba may be threatened with the storm later this weekend into early next week, when the storm could also threaten South Florida.

After a potential brush with Cuba, a decent number of models show a slow and erratic track back towards the north and northwest, allowing Eta to feed off of warm waters of the Southeastern Gulf. It’s possible Eta could survive some wind shear and strengthen back into a hurricane at that time. Many of the European and GFS ensembles continue to show that happening. After that, there is uncertainty on the exact track, but residents of Florida, especially the Gulf side need to watch closely. The GFS model has been most consistent in showing yet another hurricane strike on the central or eastern Gulf Coast states. And the high pressure pattern we’ve seen much of the fall favors a track shift more to the left side of forecast model guidance. We posted an article last week about this potential, and the chance remains higher than usual. 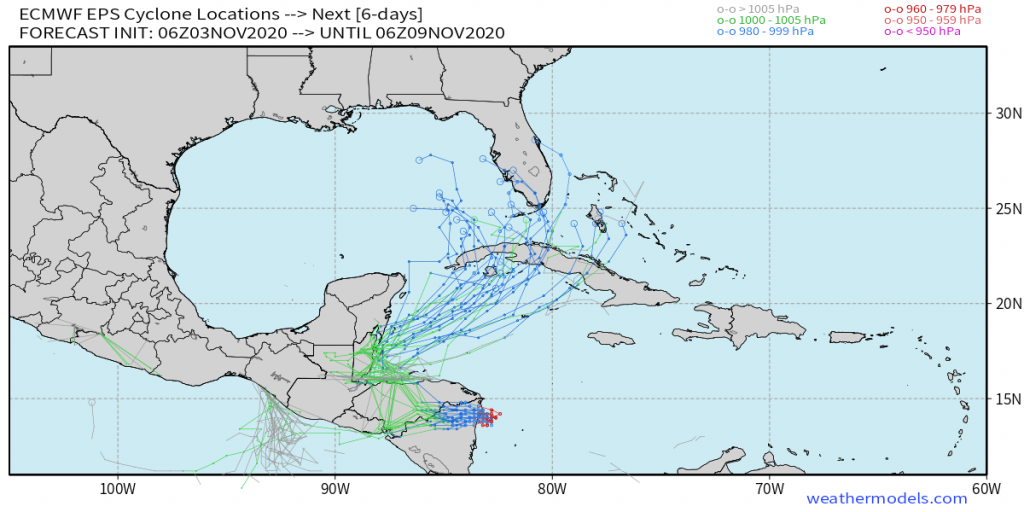 This unfortunately puts Louisiana at risk once again. The exact timing is fairly uncertain due to slower and somewhat erratic storm motion next week, but the window from November 10-16 seems most likely for a potential hurricane strike. While Gulf waters aren’t as warm as they were in September, water temperatures in the eastern half of the Gulf remain above average and more in line with late September/early October averages, and there is enough heat potential in the Gulf waters to support a hurricane, possibly a major hurricane. It would be very rare to have one this late in the season, but we believe the chance is there.

It’s a little early to say if the Carolinas will have a direct impact from the storm, but 2020 has provided us plenty of the remains of Gulf storms, so there’s reason to believe it could happen again. The time frame is uncertain, but we are looking at mid-November for that potential. Our graphic below shows the range of potential tracks which does include the Carolinas towards then. 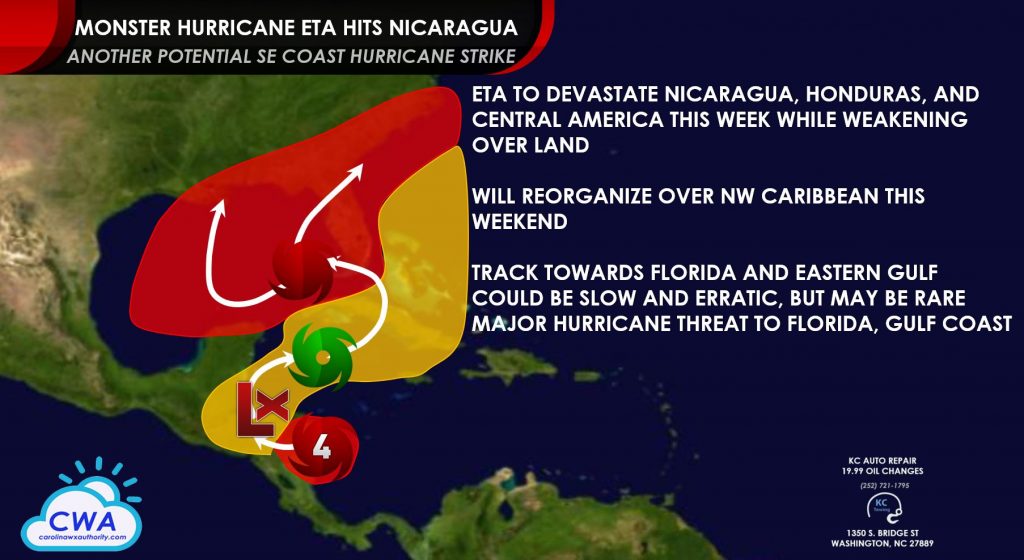 For now, this is just a reiteration of future model trend, so stay with us for the latest developments on this situation, as we will keep you informed on what will end up actually happening.