As we head into the winter of 2020-2021, we are expecting to see not what a lot of snow and cold lovers will want to hear. Our Winter Outlook will discuss the trends and conditions we can expect to see this winter here in the Carolinas. While this is just an estimate and may go either way, there is decent agreement across NOAA and many local media and social media outlets.

The last 3 winters have trended above normal in terms of overall temperatures, and below normal with respect to snow and ice. This seems to be persistent, and with *most* long-range outlooks, persistence usually wins out in the end. That being said, you almost can tell where we are going with this winter’s outlook.

Yes, we are expecting yet another warm winter, and this one could be warm and dry, or warm and wet. But overall, we are expecting a warm winter. Now, that does not mean that the winter won’t start off cold in December, as it could, and it could even be record cold. And there could also be cold shots depending on the trends of the Arctic Oscillation Index, or AO. This index could disrupt the overall La Nina trend from time to time.

SNOW AND ICE COMPARED TO NORMAL

It’s no surprise, that with an overall warm winter will come below normal snow and ice amounts for the Carolinas. This means that the ground will be brown most of the time. It’s not normal for the South to receive many snowstorms, but this winter we will be starving for snow once again. Again, there could be some snow in December, and the storms could be “freak events” such as snow in the Deep South or even along the coast. But this will be early in the season, as January and February could be months with a snow drought. Then, in March, there could be one more late-season snow.

The mountains will have their share of snow and ice, however even there the amounts will be slightly below normal overall. We’re not expecting a blockbuster winter in the mountains either.

Temperatures for our winter outlook will be notoriously warm once again, especially in January and February. However, the season could start off colder than usual in December. Some of the temperatures could be extreme, with lows into the teens or single digits. Typically, however, the coast is more protected from extreme cold during these events.

Since some of the cold will be in the early season, the mountains can expect to see near normal temperatures *overall* this winter as the mountains are typically the dividing point between cold west and warm east. Mid-winter temperatures will keep this region near normal overall, as will late season when more cold shots may arrive in March and even into April.

For the rest of the Piedmont and coast, we can expect overall above normal temperatures, with well above normal temperatures along the Coastal Plain. We are also expecting some early cold shots this season, however January and February could see record warm temperatures. More late season chill is expected in March and into April, but not as extreme as the mountains. We will be able to wear shorts more often than not this winter. 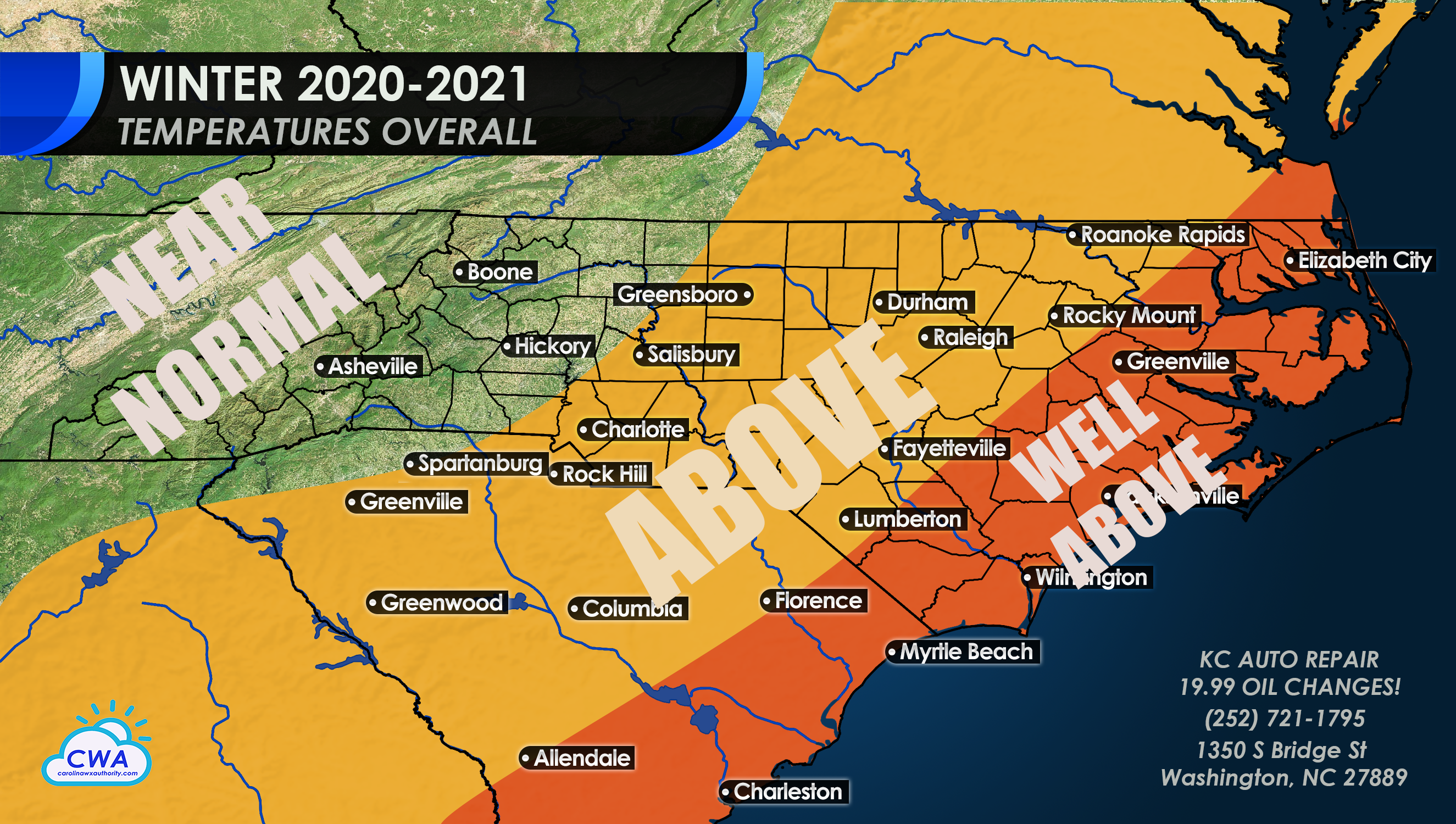 During a La Nina event, ocean waters along the Equatorial Pacific are colder than normal, and this is believed to influence the overall upper-air and storm pattern. During these events, which is expected this winter, we typically see warmer and drier conditions here in the Southeast overall. While western Canada and even the Central Plains are colder than average, the cold stays locked up in these regions and has a hard time making its way to the Southeast all winter. However, it could happen at times, especially early on.

However, since this summer trended wet, this winter could also trend wet in the form of rain, and not snow. If the Gulf stays open for business, we will see a wet winter.

Arctic sea ice has been scarce so far this fall, and that is another indicator of not a lot of cold air to work with. The sea ice levels are at a record low level right now, and that means that the Arctic is in a warm phase. There will not be a lot of cold air to load up and unleash itself on the East Coast this winter. This is essentially looking upstream to see what’s going on at the source, and if it’s warm there, it’s a pretty good bet that it will be warm here also. Any cold shots that make it our way might not last more than a week, as temperatures will rebound back to normal and then climb back to above normal.

We realize that not everyone will be happy with our winter outlook, however we like being right more than we want snow. We also like snow, but the reality is accuracy “trumps” what we wishcast for. See what we did there?

Expect grass to grow this winter across the South, and an early spring, but with cold shots late in the season that could damage plants and crops. Things may change for next winter, but for this one, hold onto the reality that we are just in a string of warm winters, and this will just be another one.

Stay up to date this winter with our models and map wall! >>> https://carolinawxauthority.com/