After leaving Cuba last night, Laura has begun to organize and strengthen over the warm waters of the southeastern Gulf of Mexico. She was upgraded to a hurricane this morning with winds of 75 mph. All models are forecasting intensification and many show at least a Category 3 hurricane in the northwestern Gulf by tomorrow night.

The combination of 88 degree ocean temperatures, low wind shear, and moisture at all levels of the atmosphere make for ideal conditions for strengthening. While the National Hurricane Center and some global models play catch up, we have thought all along that this system would be a major hurricane, and feel the potential is there for a Category 4 (or perhaps higher) intensity late Wednesday night or early Thursday morning as Laura comes onshore.

We felt a major hurricane would be possible this week, and issued articles and YouTube videos stating such. However, details were very diffuse. Now all models agree on the storm’s track, which continues to shift westward, and now could threaten the Houston area, especially the east side of the bay and Bolivar Peninsula. The worst case scenario for this situation is a rapidly intensifying storm up until landfall overnight tomorrow night. That could create billions in dollars in damage.

Models have shifted left again this morning, with many of the 12z runs now taking the storm into the upper Texas coast. However, a shift back to the east is also possible as these storms tend to wobble a lot. The northeast quadrant of the storm does continue to threaten the Louisiana coastline, especially west of Terrebonne Bay, with killer storm surge, coastal flooding, and hurricane force wind. Tornadoes will also accompany the storm in band of rain that move onshore to the east of the storm’s track.

Global models began to show a stronger storm potential once the storm moved past southern Cuba Sunday night, but still had some disagreement on intensity, while tropical models continued to show the threat of a major hurricane. We are now seeing an upward trend in intensity on all models except the tropical models, which have held tough in this fight to figure out how strong Laura will get. We could see a Category 4 hurricane upon landfall.

Some wind shear is expected as the storm is approaching the coast, and that could be the one thing that saves the strike zone from complete devastation. 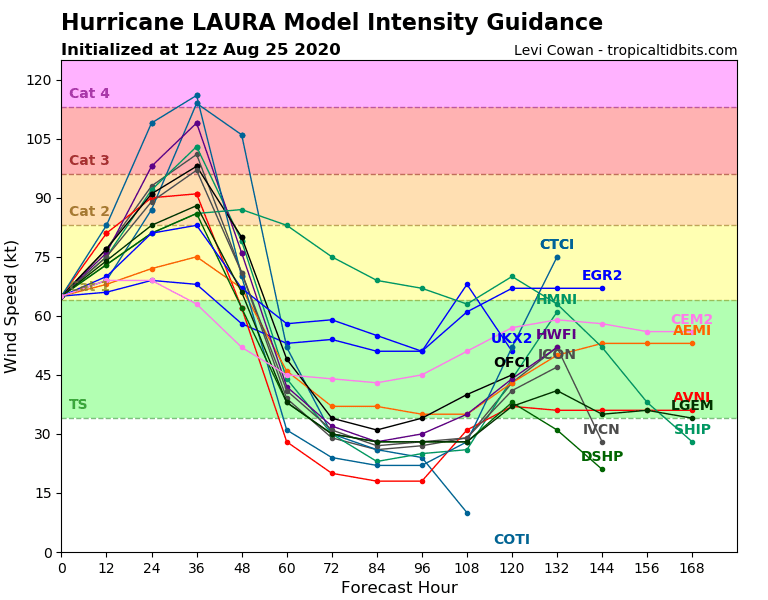 Models show landfall occurring between Midnight and 4 AM CDT on Thursday, while many will be sleeping. This has the potential to be one of the worst Gulf hurricanes of all time, rivaling Katrina, Rita, Andrew, Ike, Betsy, and Audrey. We might be stretching it if we mentioned Michael or Camille, but that potential is still there.

There is a lot of uncertainty on how this system will affect the Carolinas and mid-Atlantic states Friday night and Saturday, but we could have potential problems that will be addressed in the coming days. Please follow and subscribe to our YouTube channel for more in-depth videos.