There has been quite some time since the Southeast Coast, especially the Carolinas, has seen a major hurricane. Anyone who has lived here their whole lives or for decades probably remembers Hugo from back in September 1989. Hugo was a borderline Category 3/4 at landfall near Charleston, SC. The storm then moved inland and tracked directly over Charlotte, NC.

There have been other major hurricanes that have pummeled the Carolinas, such as Hazel which affected the Wilmington area and dropped a ton of rain, causing catastrophic flooding. There was also Fran in 1996 and Irene in 2011, which were either Category 3 or below. A majority of the hurricanes that have hit the Carolina coast have been Category 3. 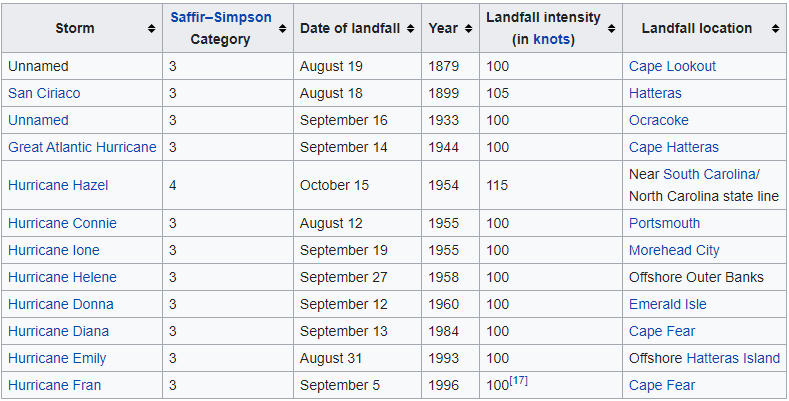 This season is expected to be ripe for an active hurricane season given how warm the ocean water temperatures are. Since it was a warm winter, the ocean did not have much of a chance to cool off. Now that we are headed into the summer months, the water temperatures will increase even higher, providing fuel for numerous potentially catastrophic hurricanes.

Due to this fact, we are thinking that the Southeast Coast will be impacted by a major hurricane this season. A major hurricane is defined as a Category 3 or higher. Our prediction is that at least ONE Category 3, 4, or 5 hurricane will hit somewhere from the Georgia coast to the North Carolina/Virginia border. It may just be a Category 3 and that’s it, or it could be a Category 4. Or even a 5 or any combination of all three, or just one of the three.

Our forecast threat areas  of highest concern do include the Gulf of Mexico, Florida, and the SC and NC coasts. We are calling for 15-20 named storms, which is significant, and we even think that we could surpass 20 named storms and make it all the way to “W” in the alphabet for named storms. Tropical systems may make it all the way up to the Northeast coast including Long Island and New England, especially southern New England. Texas is also not out of the woods as they will likely see some sort of landfalling tropical system.

We have already seen three named storms so far this season as of the first week of June, and hurricane season only officially started June 1st. We did not see our “C” storm last year until much later in the season. This is a sign that things are already active. In fact, below are the seasons which held some of the busiest Atlantic seasons on record. This season ahead could certainly land itself somewhere on this list.

What is the takeaway message. It is to remain alert and vigilant this season especially if you live along the coast, as conditions can deteriorate quickly. Check the forecast before traveling to the beach and take the weather seriously when considering pursuing vacation plans if a tropical system is threatening. It’s better to get a refund on hotel stays than it is dealing with a major hurricane at the beach.

If you live along the coast, make sure you have plenty of batteries for flashlights, NOAA weather radio, and supplies in case the power goes out for weeks or if you cannot get gas or food. Don’t go too crazy hoarding items (as we have seen with the pandemic), but be sensible and safe.

That’s the best advice we can give. In the meantime, enjoy summer and remain weather aware, and everyone will be fine!

Please share this article of critical information with your family and friends, it could save a life!