Invest 93L has been making news headlines recently. While this storm is entering the Gulf of Mexico, it is not expected to become a monster storm. The reason is because of the upper-level shear environment. Hurricanes and tropical storms need a very low amount of shear, or no shear at all to strengthen rapidly. However, the shear in the Gulf and over the area where this Invest is forming is rather strong.

Here is the latest satellite from NOAA:

As we can see, Invest 93L is a disorganized blob of thunderstorms just off the Yucatan Peninsula coast. The other factor is the amount of shear that this storm will encounter on it’s way into the Western Gulf. Once it hits this area of shear it will likely weaken or remain weak.

Nonetheless, this Invest is projected to move into the Western Gulf in the coming days and make landfall somewhere around Texas or Louisiana. The path is uncertain, however the spaghetti models are starting to latch on to a general direction. 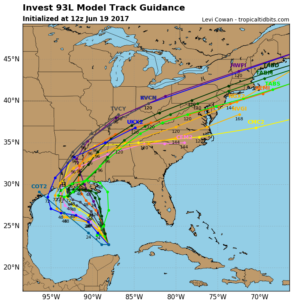 The track for the second storm, Invest 92L, seems to be just off the northern coast of South America. This system is forecast to become a tropical storm in the coming days. However, once it hits the high shear area that we talked about, it will likely fall below tropical storm strength. Biggest threat from these 2 disturbances will likely be flooding. 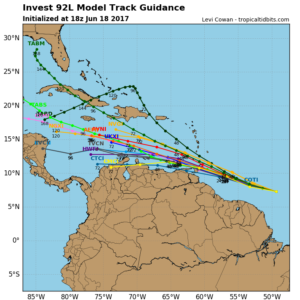