This week will turn very active, and the end of December is looking very wintry. A quick-hitting Clipper system will dump some light snow up North, and perhaps a period of flurries or a dusting for Philly. Nothing major, however folks up North will have a high likelihood of seeing a white Christmas morning. Jealous of them. Those who live in the interior Northeast will have the best chances of seeing accumulations for Christmas morning. 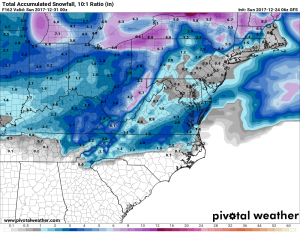 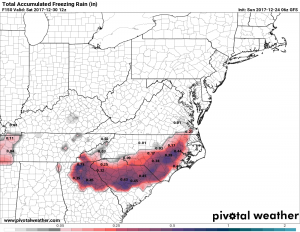 Roads will quickly become dangerous across NC especially along I-85. Much of the precipitation that falls across western NC could be freezing rain, and ice as a result.

Friday morning rush has the potential to be very messy. There are lots of schools and businesses that will likely close on Friday and perhaps even Saturday.

The winter storm threat does not end after this storm, as yet another storm will be in the Southern branch of the jet stream. Another storm moves through on New Years Day, and could start as early as New Years Eve. This is not expected to be as high impact as the 29th storm. Light accumulations are expected, however it will be enough to cause issues. Not as much ice is expected either. 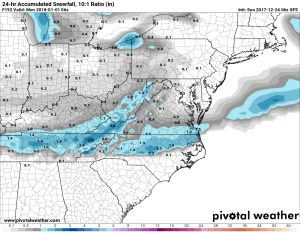 GEFS ensemble snow depth through 5 Jan shows a considerable amount of frozen precip on the ground through the first week of January. This would also mean very cold, especially since there would be snow on the ground. Nighttime lows could dip into the 10s for many. Snow could be on the ground all the way into Georgia! This image is basically indicating that there could be 1-3″ of snow/ice on the ground up until January 5th, at least, and perhaps beyond. 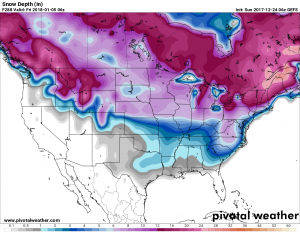 After Christmas, and after the end of the week storm (12/28-12/30) it won’t get extremely cold behind these storms as they depart. The real cold comes after New Years, as we head into the deep freeze. The morning of the 2nd is looking very cold at 850 mb, which is about 5,000 feet above the surface. We can use this to say that it will also likely be cold at the surface. 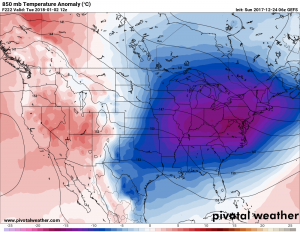 After the 2nd, there is some uncertainty if the cold will persist. The GEFS ensembles show that it might actually warm up closer to the 9th. This could change, especially if there are repeated intrusions of Arctic air. This could be a pattern of storminess and brief Arctic intrusions, and then warm again. 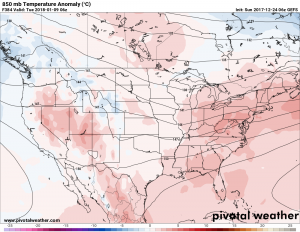 One thing is for certain, if you have central heat in your home, it might be a good idea to use the “emergency heat” option. Also, I would stock up on firewood in case the power goes out! If you live in NC, I would say this is an increasing potential. Some of the ice could also make it up into SE VA, so do not let your guard down there Thurs-Sat this week. This is my biggest concern. An ice storm. Please prepare if you have not done so already. I would say the SC coast is safe from this.

Please comment below if you have any questions or concerns. Also you may email [email protected] or call 484-994-1027.

THANK YOU for being a valued member!