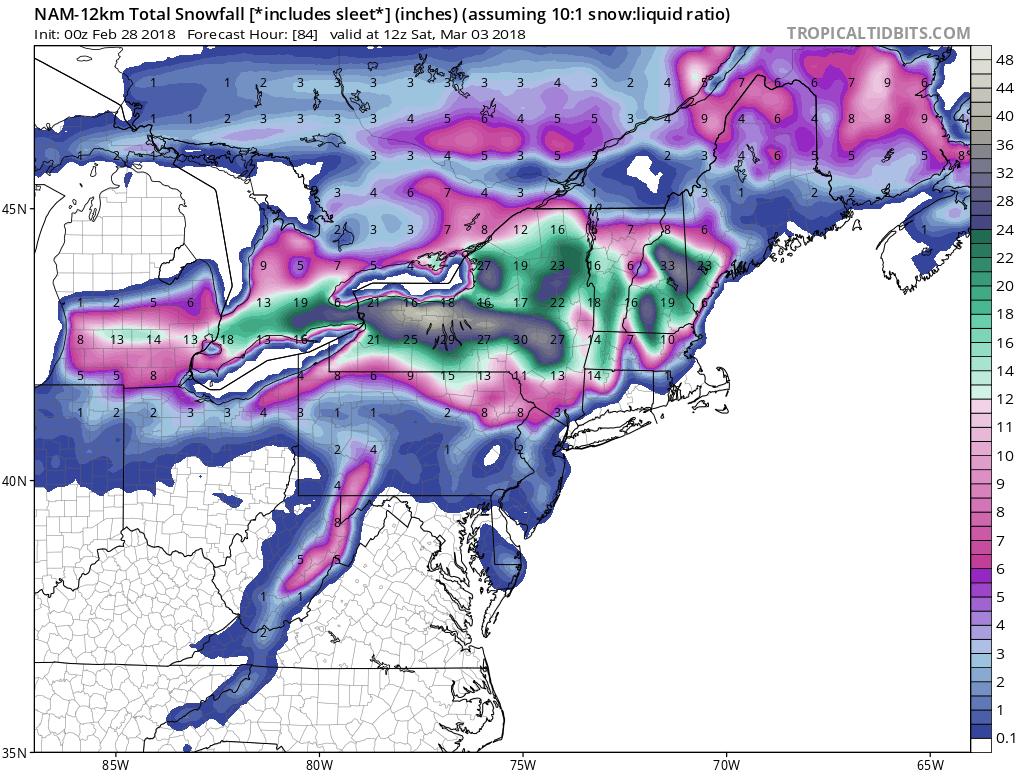 First thing that stands out is the monstrous accumulations across Western and Central New York upwards to 40 inches,WOW. Now, at first glance I notice that the heaviest is along the shores of Lake Ontario and the best way to put that is thats lake enhanced snow. The reason for the lake enhanced snowfall is when the low transfers its energy to the east coast the winds crossing the lake will change from a east/southeast orientation to a west north/northwest orientation, which then due to the elevation across that region it will enhance lift allowing heavier snow rates to fall in Central New York.

Next let’s take a look as to why there is heavy accumulations into places in New England. Now, in New Hampshire and Vermont there are various mountains which will do the same lifting process as which will occur along the south and west shores of Lake Ontario. There is also another aspect to the model run and that is duet our Greenland block. 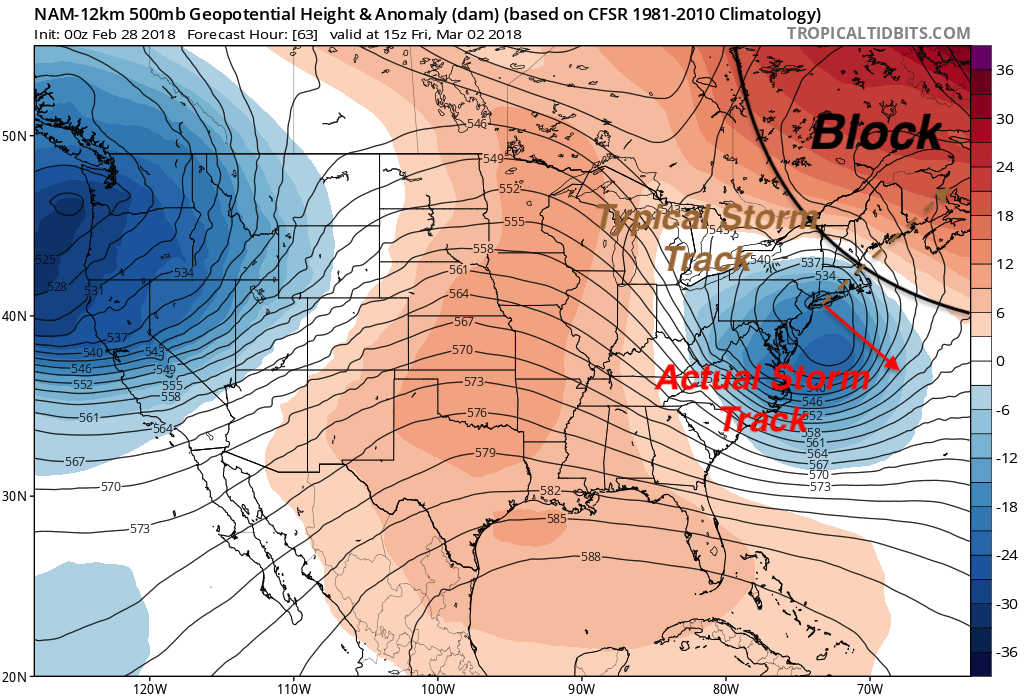 Our Greenland block is what makes this storm a potential monster for places that change over to snow rather quickly. The block forces our storm to take a rather unusual storm track, typically nor’easters take a northeasterly track and move out over Nova Scotia fairly quickly, but this situation is unique. Naturally, our storm would like to move northeasterly into the Nova Scotia area, but this monster block over Greenland, which is a lot more persistent and stronger then in previous runs of the NAM, forces our storm to go into war with the block and the block will win out. Due to the block winning out the typical storm track, which is shown above, will take a very unusual southeasterly track all because the Greenland block will suppress our storm, slow it down and keep it over the Northeast and New England much longer. 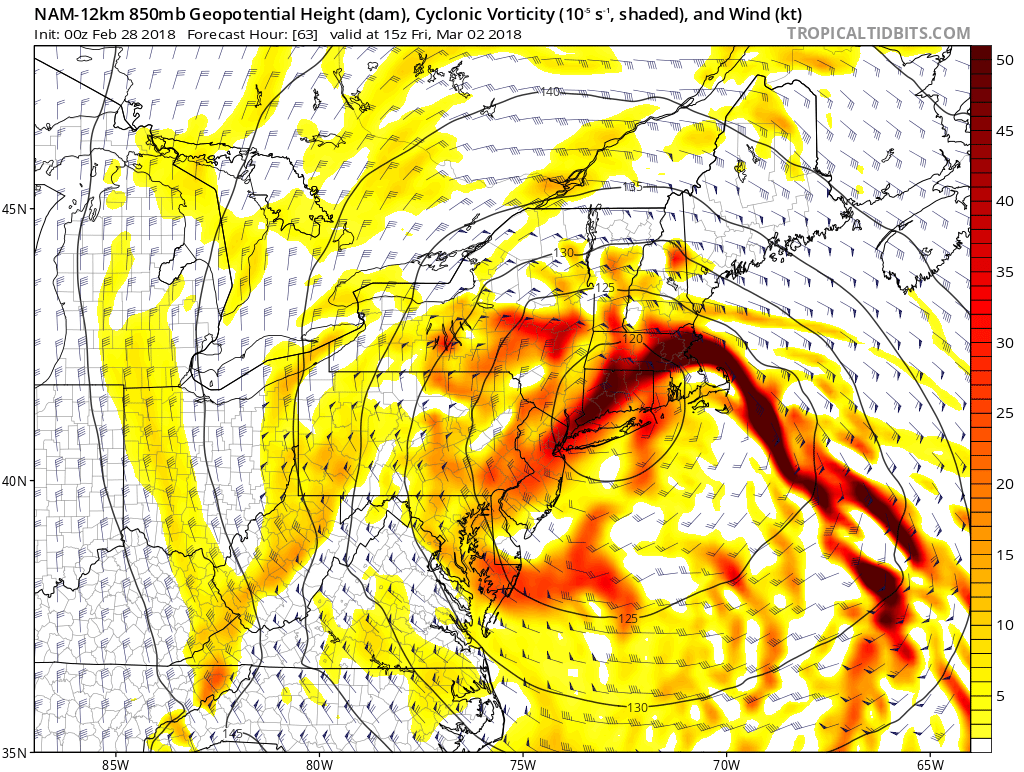 Another aspect that is causing the NAM to absolutely destroy portions of the Northeast is banding. Above is 850mb vorticity and what I notice first is what we call the fort maxes which are where the darker shades of red are located. This is ver important when forecasting banding which a typical phenomena that Nor’easters experience. Notice the huge fort max over New England, to me what this shows is once the changeover occurs as the energy is transferred to the coastline that the snow that will be coming don in that region will be very heavy with zero visibility at times. That’s not the only place with fort maxes. Also, into the Catskills and lower Hudson Valley we have the same occurrence, once the change over occurs the snow will come down ver heavy and accumulate quickly because of the rate at which it will be snowing. Finally, in Central New York and in the mountains of Vermont and New Hampshire we have a few areas to look after. In those New England states we have our maxes along the eastern sides of the mountains and that is because of the extra uplift that will occur when the winds are forced to move up the mountain help create heavy snowfall rates. In Central New York we have fort maxes as well which also shows heavy banding that can occur. For Central New York, Vermont, and New Hampshire the cold air will make its way into those areas first allowing for the heavier snow totals. Finally, with the storm moving at a slower pace then typical nor’easters the banding that will take place will hover over an area linger which is why the NAM buries these places.

Overall, I do not believe the NAM and neither should you, BUT one thing that this run of the NAM tells us is we much watch the areas talked about above and the different parameters that go into where the heaviest of the snows will fall. All-in-all models have been trending colder which is allowing for more snow to fall rather then rain, which is why I can see an over overperforming snowstorm for may in these areas. More on this storm tomorrow as the rest of the models come out, plus what we are expecting as far as snowfall for this storm. Tricky storm to forecast, but us here at East Coast Weather Authority will get you prepared!