With the upcoming snow system, which is essentially an Arctic front that will stall, the highest totals will be near Richmond but also west. There is a bullseye on both the Canadian and GFS, also Euro (can’t show here). CMC Canadian is the first image. GFS is the second image. The bullseye with the GFS is right over Richmond. Raleigh will also be impacted with totals up to 4.” 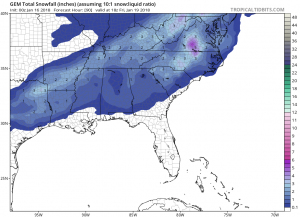 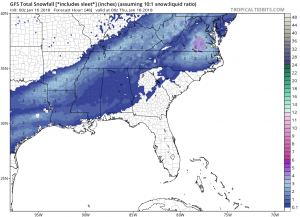 In the Northeast, there is decent agreement for a general 2-3″ across Philly and the suburbs, and up to half a foot in Rhode Island and Connecticut. They very well may be the sweet spot for this entire event, outside of Virginia. GFS 1 image. CMC 2nd. 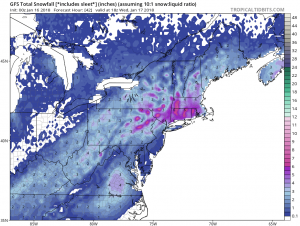 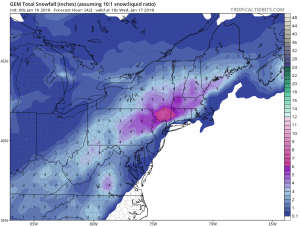 This system will be tricky, and amounts may shift as far as the bullseye location. We might not expect the highest amounts in reality compared to the models.

Light snow will push into the East Coast on Tuesday and into Wednesday. The Arctic front will stall, and two waves of low pressure, one to the north will move by and then another one will develop off the NC/VA coast and move out to sea. A quick 6″ is expected as these disturbances move away after they form along the front.  Richmond and NY/CT/RI will be hit the hardest.

Across the Piedmont of NC, we can expect very light amounts if anything at all. The snow moving in from the west on very early Wednesday might be moisture-starved, so there is a high bust potential for Charlotte and across southern NC and northern SC. Eastern NC is much more likely to see higher amounts.

Southeast VA will also see about 1-2″ and Richmond could see up to 6″.

Stay safe, and only go out if you must. Refreeze potential is likely as temperatures will dip into the 10s for many.

Need roof work done or a new roof? Or need a roof inspected? They cover all of NC! Post hail or wind damage, or ice storm damage will be assessed for FREE!