It’s clearly evident that we’ve managed to shake our extended summer pattern and gradually descend into a cooler and wetter autumn regime over much of the Eastern US, including the Carolinas. This is what we previously alluded would occur, but not without some milder days on occasion. However, our forecast modeling is becoming more consistent on the idea that we will continue to turn significantly colder later this month, and possibly into early November.

THE TYPHOON RULE AIDS IN THE FIRST PATTERN STEP-DOWN OF MANY:

Already this week we are witnessing a considerable amount of verification from what we discussed last week as a trough digs into the Northeast, with accompanying low pressure bringing rainfall to the Carolinas tonight into Wednesday.

Measurable rainfall amounts in a lot of areas of generally a half inch to an inch can be expected. Additionally, a shot of chillier air will follow behind the cold front and likely bring the Blue Ridge Mountains their first frosts and possibly freezes, with many portions of Northern and Western North Carolina seeing their first frosts Thursday and Friday mornings depending on your location. We can’t even rule out a stray flurry or snow shower in the highest elevations of Northwest North Carolina early Thursday morning, but the chance is low. Regardless, check out these low temperatures on Thursday morning:

Why is this occurring? If you read our article last week, we talked about the re-curving typhoons in the North Pacific and how they often re-arrange the jet stream orientation over North America. The product of that rule is occurring this week with the trough over the East, and don’t be surprised if you see it happen again. However, with the MJO still in phase 1, we will see the trough begin to retreat, as it makes a quick exit by later this week, allowing weak ridging and milder anomalies to return to the East early next week. (Additionally, there may be some tropical mischief afoot later this upcoming weekend to keep an eye on, but it’s early, and that issue will be assessed in a separate post.) Furthermore, the ridging early next week is not expected to last as a series of deep troughs begin diving into the Central and Eastern United States as our pattern change really starts going to work.

THE LATEST ASSESSMENT OF VARIOUS TELECONNECTIONS AND THEIR IMPACT MOVING FORWARD:

In previous analysis we discussed various teleconnection and pattern drivers that would play a role in our forecast later into October. Since then we’ve began to see these various indices line up.

Our previous examination of the Madden Julian Oscillation or (MJO) had it stalled in phase 1 which recently encouraged troughing over the west and ridging in the east. The Madden Julian Oscillation is a series of weather patterns in the tropics that often have a huge role in how our other various teleconnections react, and therefore affect the general pattern over the Northern Hemisphere. Various phases of the MJO and their associated amplitude often dictate just how much influence it has on that pattern. We’ve been expecting to see a transition from the warmer phase 1 for the east to a much cooler and wetter phase 2. If we take a look at the latest forecast guidance we see that transition about to occur. This is likely going to shift everything in a big way very soon, with more notable changes likely beginning next week.

As you can see, phase 2 offers up a much colder pattern for the Southern and Eastern United States, and that is likely where we are headed shortly.

Take a look at some of the other latest teleconnection forecasts for later this month:

The North Atlantic Oscillation (NAO) is expected to go generally negative for later this month and what that means is high pressure over higher latitudes such as Greenland will likely act as a block with troughs in the jet stream over the Eastern US, which will circulate into the country and re-enforce the cold air in multiple waves. If you look at the GEFS modeled temperature anomalies for later this month, you can see the cold air continuously reloading into the East, with the potential for one or two really deep outbreaks of cold air relative to this time of year:

Additionally, the Pacific North American Teleconnection Pattern (PNA) is expected to go considerably positive, which will further pump the ridge of high pressure along the West Coast and deepen troughs over the East later this month. The GEFS ensemble modeling clearly illustrates this, and we should see even more alignment in the rest of the forecast modeling coming up. Furthermore, the MJO working its way into phase 2 should allow little push-back in these scenarios which means our forecast confidence to this pattern change we’ve been discussing, is growing considerably.

One last extreme to consider is if the Arctic Oscillation goes negative. That is one teleconnection that looks slightly more uncertain in what it may actually do later this month. If it goes negative, it will increase the likelihood of a disruption to the polar vortex, which could really up the ante in the cold we see later this month to a further extreme. That is not a guarantee right now, but it is on the table, and something we need to watch carefully.

WHAT TO EXPECT LATER THIS MONTH:

Here’s a visual of what to expect later this month: 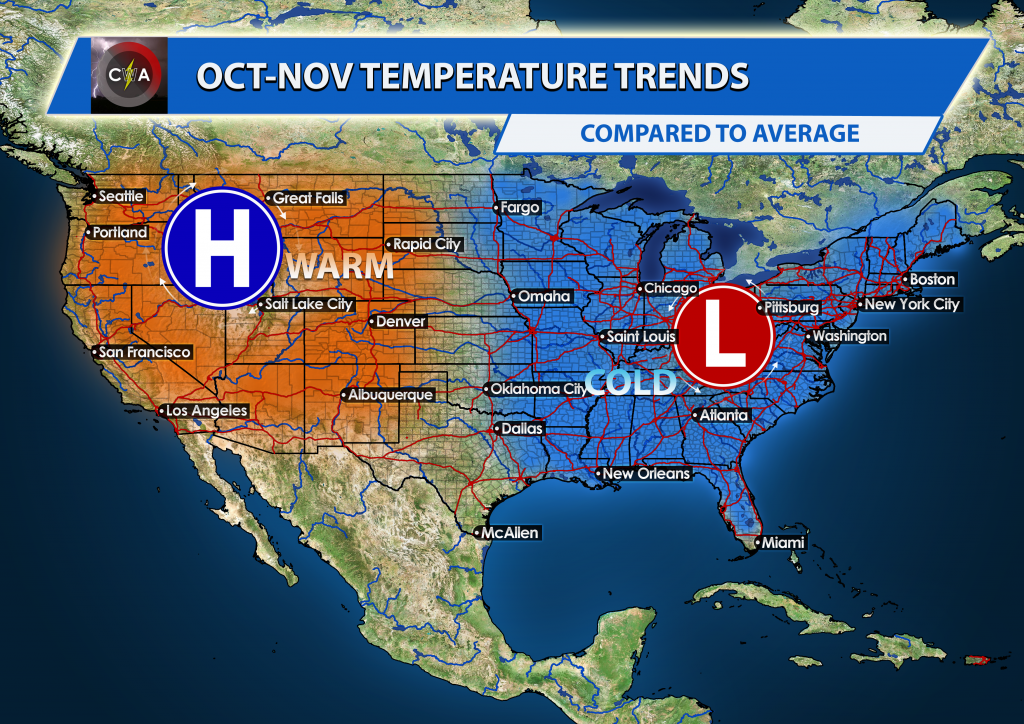 After looking at various computer modeling, we strongly believe that the period from October 25th through October 31st will run considerably below-normal in temperatures overall across much of the Eastern US, including the Carolinas. This means that Halloween is likely to be unseasonably cold for trick-or-treaters this year. In the extreme case that everything comes together, we may see some record-breaking cold at some point with one of the troughs later this month. The colder than average pattern may extend into part of November as well, but we’re still looking into that and confidence is still somewhat lower on that idea.

Multiple troughs will likely deepen over the East with reinforcing shots of colder air and strong cold fronts ahead of them beginning as early as mid to late next week. We might have to watch out for severe weather with one or two of these fronts, as we’re getting into that secondary season over the Deep South. It’s not a guarantee, but it is a possibility. One or two of these troughs could really deepen and bring about some winter-like chill. It is very possible that the higher elevations witness their first snowfall, or at least first flakes before the end of the month. Some areas further south and east that don’t experience a frost or freeze later this week , may experience one later this month with one of these troughs digging into the East, at least over North Carolina and points north. We advise you all to be ready, because the cold is likely coming. It won’t be like an outbreak typical of mid-winter, but it will definitely be impactful, and feel like somewhat of a shock to the system to end October after the way this month started.

We will continue to monitor the latest forecast model trends and changes, and update you further on the development of this colder pattern. Please stay with us in the days to come and check us out on Facebook, Twitter, and Instagram, as well as here on the site.