THE WINTER THAT WASN’T

We did forecast a winter of above average snowfall for much of the western Carolinas. However, that forecast doesn’t seem to be coming to fruition over the course of the next couple of weeks or so. What has been causing our overall temperatures to be above normal? Alaska has been colder than usual, and this is the “kiss of death” for East Coast winters. The main jet stream dipped south over Alaska, and in a series of “short” troughs and ridges, the East Coast ended up with a ridge. The southern branch of the jet stream was extremely active in December, which helped keep the Southeast mild. But now we enter a different “kiss of death” in the coming days and weeks.

The ridge of high pressure, and warmth, is forecast to be too far west into Alaska. It’s that, and that Alaska has been colder than normal. Both of these are signals of a warm East Coast winter. When the warmth is over the Aleutian Islands, it allows for a trough to form over the West Coast. This is a pattern that we’ve seen now for the past 3 winters. With the West Coast trough, it “pumps up” a ridge of high pressure, and thus warmth in the East. This is why it’s been so tough to get cold and snow. 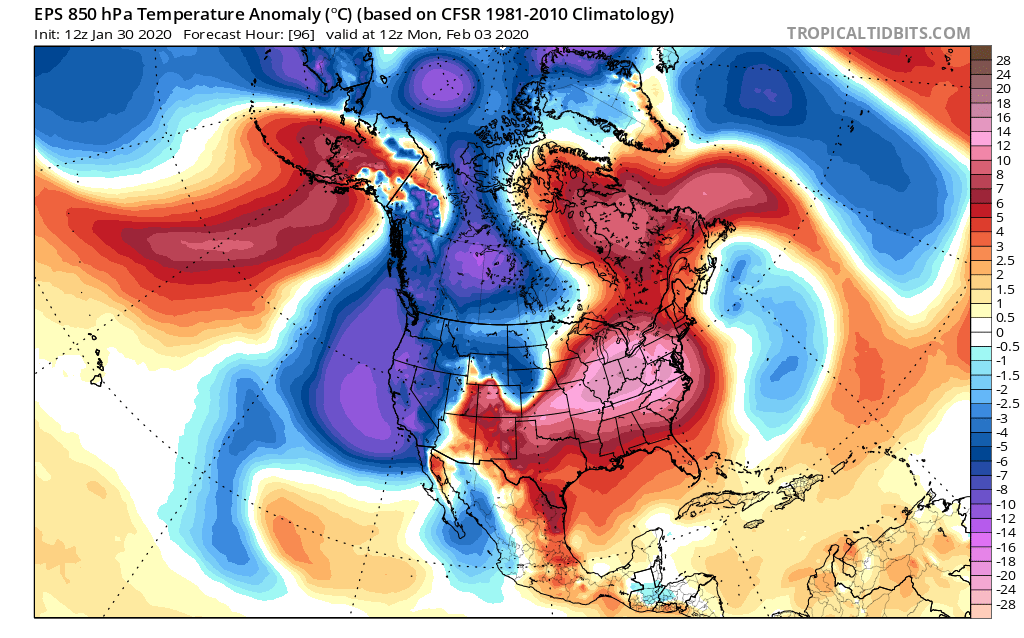 The above image is actually a model forecast by the Euro ensembles for February 9th. A closer look below shows a huge ridge of high pressure which could bring some unseasonably warm temperatures for the first week of February. The snow drought will continue. But, some record highs could also be set.

These past three winters have been frustrating for snow lovers. It’s also frustrating for forecasters since we really have nothing to do, other than watch the paint dry under these ridges of high pressure.

If the pattern doesn’t change drastically tomorrow, many winter outlooks are going to be up in smoke.