We are gearing up for yet another snowstorm for the Northeast US. Yet again a storm system will come out of the Ohio River Valley and transfer its energy to the East coast. That energy will form another low pressure system off the east coast, this one near the Delmarva and move northeast and hug the coast tightly. This storm will yet again bring heavy snowfall and strong winds to the coastal areas. Before I show our snowfall map let’s take a look at where our storm is right now and how it will make its way into our area.

Our main system right now is located near the South Dakota/Nebraska border and it will continue to propagate south east into the Ohio River Valley. As our system moves into the Ohio River Valley “E” or our extra energy and cold air injection will be sucked into the storm. Once our storm nears the Appalachian mountains it will then transfer its energy to the East coast which will then allow our secondary, or daughter, low will resurface near the Delmarva. The tight track to the coast is all thanks to our Greenland block that made the last storm stall, and will allow this storm to tightly hug the coast as it moves northeast. With this storm we will have yet again very strong winds hat could cause power outages and even more coastal flooding especially because the coast is battered with the last storm.

Heavy snow will yet again be in the forecast so let me show you our forecast! 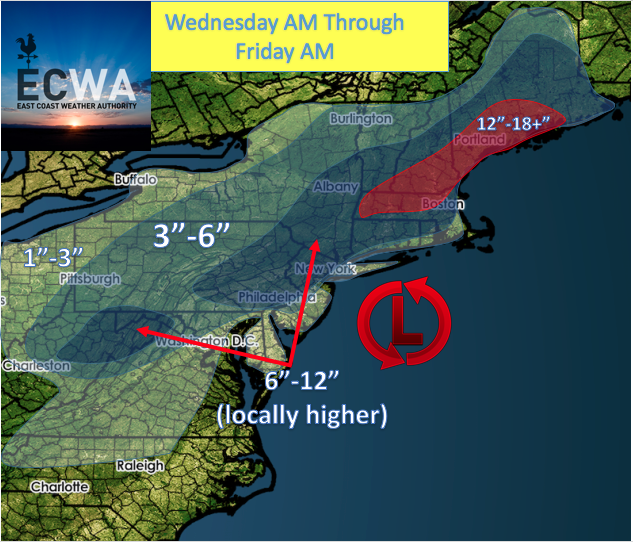 Areas including New York City, Boston, and Philadelphia get ready because heavy snow is on its way and will accumulate up to a foot with local spots receiving even more snow. Just north and west of Boston expect higher accumulations with up to two feet possible. There will be mixing issues along the eastern part of Long Island, the Cape, Southeast Connecticut, and Southern Rhode Island. Strong winds will again be part of this storm with coastal flooding possible, especially areas that have been badly beaten with the lats storm. Thats all for the storm for now, but be sure to stay here with us as we get you prepared for what mother nature has to bring.