According to the Ensembles, we will no doubt be entering a period of warmer than normal temperatures into the middle of this week right up until the weekend. There could be a front that moves through after this weekend, and we may have to watch out for severe storms. With the threat being real for sever storms, a much clearer picture will be  overall, as a cooler pattern will re-emerge once we are past the 14th.

After the front moves through we look to be overall closer to normals for the 3rd week of March. But some locations could exist that will have sustainable below-normal temperatures for the latter half of this month. Close to normal for late-March in the Southeast is 50s and 60s, and perhaps a tad higher along the Carolina Coasts.

Find these images at tropicaltidbits.com click any image below for larger version: 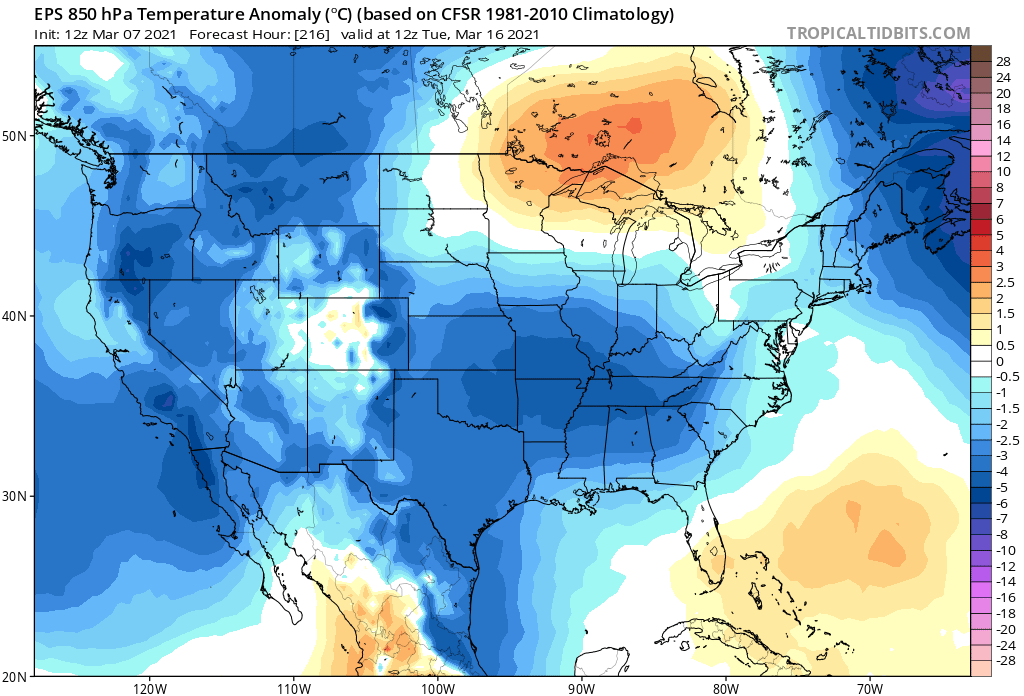 What are we talking about as far as morning lows for our region? Likely in the 30s and 40s, while some low 30s freeze threats will still exist. Officially, the CPC is calling for higher chances of below-normal temperatures for a majority of the U.S. The western Carolinas have a better chance of seeing cold or below-normal temperatures once again in the 8-14 day range.

Even though we warm up this week, we potentially cool right back down by mid March. #scwx@NWSCPC pic.twitter.com/V4lb2qRk8U

This is not expected to be a major Arctic Outbreak like we saw in February. Rather, seasonal average to below average temperatures are expected in the Carolinas, which carries the threat for a freeze or two before the end of this month. Planting outdoors is still not recommended. At least not until mid-May.

You may have to keep the long pants and long sleeve shirts around for a bit yet, since the mornings and nights will be chilly. Probably closed-toe shoes at night and mornings also.

The takeaway is have some winter clothes left for the end of this month, then we should be good.