After pulverizing the Bahamas for over 24 hours with scarcely any movement, we’re finally beginning to see a shift in Dorian’s placement and intensity. Latest indications place Dorian at a high-end category 4 as she remains stalled over the Bahamas through early Tuesday, followed by the northward trek in a parallel fashion offshore the eastern Florida coast later on Tuesday into early Wednesday morning.

Eastern Florida is still likely to experience some tropical storm and even hurricane force conditions which have prompted necessary watches and warnings, but the impact will be considerably lesser than a Florida land-falling scenario which is decreasing in likelihood with latest model trends. This scenario has been made possible by the perfectly timed trough swinging through the Great Lakes which will tug on Dorian, and ensure the re-curvature of the cyclone. This eliminates the cyclone from going further west, likely keep the majority of Florida in tact and recovery mostly manageable after Dorian is gone.

After paralleling the east Florida coast and grazing the coastal areas with hurricane conditions, the storm will remain slightly offshore the Southeast Georgia coast further northeastward before reaching the Carolinas by later Wednesday into early Friday. Check out this evolution played out by the latest run of the GFS model:

This is fairly close to how we feel Dorian’s progression will occur.

We can expect Eastern South Carolina to see impacts from Dorian as early as Wednesday morning when winds will become gusty and tides will begin to become excessively rough and dangerous. Rain should begin falling sometime Wednesday afternoon or evening. By later Wednesday into Wednesday night, Dorian will reach the Carolinas as a category 2 hurricane and begin to travel just offshore of Northeast South Carolina into Eastern North Carolina Wednesday overnight into early Thursday with landfall expected somewhere along the Outer Banks on Thursday.

Rainfall will become torrential, and flooding will become a likelihood from heavy rainfall rates, and storm surges. Rainfall amounts could tally several inches in most locations along and east of I-95, with localized amounts up to a foot near the coast. Check out the latest rainfall guidance from the Weather Prediction Center for Dorian:

Tropical storm force wind gusts can be expected most areas along and east of I-95 with hurricane force winds in the coastal areas. Some coastal regions could see winds near or surpass 100 mph which will likely lead to considerable damage along with flooding damage from excessive rainfall and storm surges. Another item to watch for is the slight risk of isolated tornadoes late Wednesday into Thursday near the coast. The northeastern quadrant of the storm tends to carry that potential most, which is why areas along the coast should be vigilant of that possibility.

The area with the highest hurricane potential and most extreme impacts will likely be the Outer Banks of North Carolina where we currently expect the risk of landfall to be the greatest as reflected in our impact map put together by Mike earlier today: 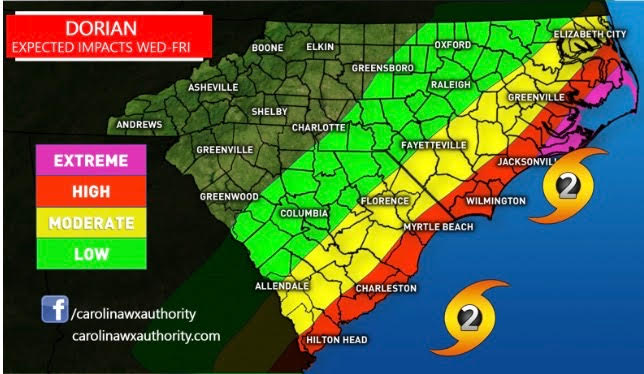 The storm should reach Northeast North Carolina and Southeast Virginia Thursday night into early Friday, where tropical storm or potentially category 1 hurricane conditions will be still possible in some locations, as the storm is expected to be on the Northeast North Carolina coast, or beginning to move slightly offshore at that point. Strong, potentially damaging wind gusts and heavy rainfall are possible in these areas east of I-95, and storm surges are possible near the coastal section of this region. Some minor gusty winds and heavy downpours are possible west of I-95, but no significant impacts are expected for those areas. Dorian is expected to exit east into the Northwestern Atlantic on Friday.

Make sure to take all necessarily precautions and plan for hurricane conditions in the coastal Carolinas, especially the Outer Banks. If mandatory evacuations are in place for your region, heed them. It’s better to be safe than sorry, despite what you think will or will not happen. Having a hurricane kit in place would be a wise solution, should you somehow be trapped in other circumstances. Power outages are likely along the coast, but possible inland as far west as the I-95 corridor. Fallen trees and damage to structures is likely near the coast and possible inland as far west as I-95. Flooding damage is also possible inland in Eastern North Carolina, and likely in coastal regions of North and South Carolina due to storm surges and excessive rainfall.

Stay tuned for all watches, warnings, and outlooks from the National Hurricane Center, and your local National Weather Service offices. Check back here on the site, and our Facebook and Twitter pages for the latest important information updates on Dorian. We’ll keep you updated.