The much anticipated winter storm for this weekend is on the way. Models have fought with each other run after run to figure out what track this storm will take. Finally, models have begun to have an agreement on the low pressure system moving off the Delaware coastline. This now leads to the one remaining question, where will the rain/snow line setup? Below are our thoughts on what hazards are expected with this storm and where the rain/snow line is likely to set up: 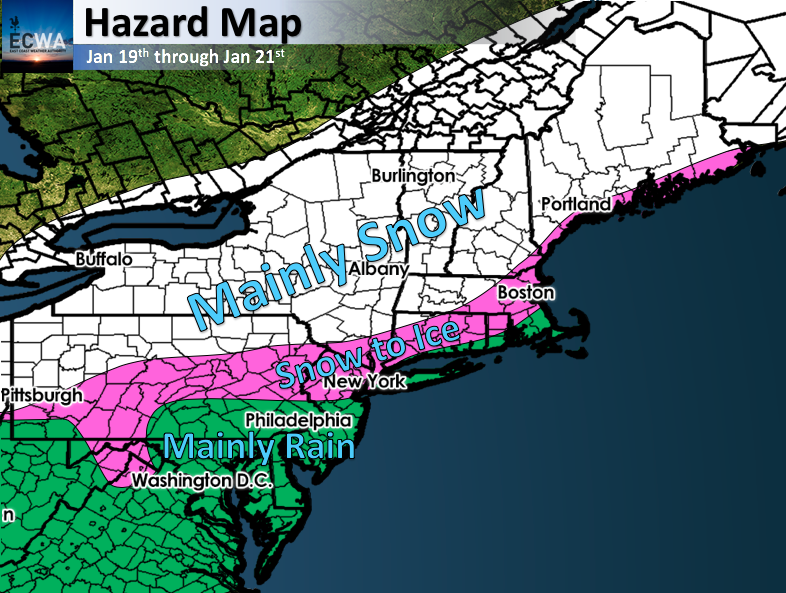 The main concern with this system will be ice. The ice threat contains areas northwest of I95, into Central Pennsylvania, as well as the highest elevations in the Appalachians. With the low pressure center being well west of the 40/70 benchmark, and a low level jet consisting of 70 knot winds from the south, icing will be a big concern. Areas in the pink could see upwards of 3/4″ on top of upwards to a foot of snow. This will only exacerbate the strain on power lines and trees leading to power outages in the area.

Finally, areas in the green will be mostly rain as warm air advection will erode the arctic air and fairly quickly as low pressure moves northeast.

We will have our first crack snowfall map tomorrow, including icing map, so make sure you stay with us here at East Coast Weather Authority.