Unfortunately, it doesn’t look like the fireworks and festivities of the fourth are going to be free from any interruptions, as forecast modeling suggests that scattered to numerous showers and thunderstorms will develop into the afternoon and evening hours for your Independence Day forecast.

No one is guaranteed a dry sky fireworks display and you better be prepared for some terribly timed downpours in some areas.  Unfortunately, some storms will likely carry the risk of some strong winds, which could blow around some festival tents or tablecloths for holiday picnics. There could also be some storm cells with hail and dangerous lightning; not the safest weather for outdoor activities by any means. It won’t be an all-day washout, and hopefully some of you will escape the inclement weather conditions and be able to continue your holiday plans. However, it is likely that at least some of you will be interrupted, and in a few cases impacted by severe weather.

Take a look at the afternoon run of the HRRR model and its depiction of the radar progression for the fourth from 12:00 to 10:00 PM:

While that isn’t necessarily an exact representation of the placement and intensity of all showers and thunderstorms, I think its safe to say that the general idea would suggest that coverage of showers and thunderstorms will be fairly numerous. Once again, the risk is certainly elevated that there is some severe weather involved in some areas, particularly in central and eastern parts of the Carolinas. In looking at some of the severe weather parameters on the modeling, we notice that our CAPE is rather elevated for the afternoon and evening hours, especially the further east you are in the Carolinas. CAPE stands for Convective Available Potential Energy. It’s the amount of fuel in the atmosphere that gives way to thunderstorm development. The higher the cape, the more intense storms can become, leading to more intense impacts such as high winds, hail, dangerous lightning, and torrential rainfall with some cells. Take a look at our projected available CAPE for the afternoon and evening hours from the HRRR model just by noontime: 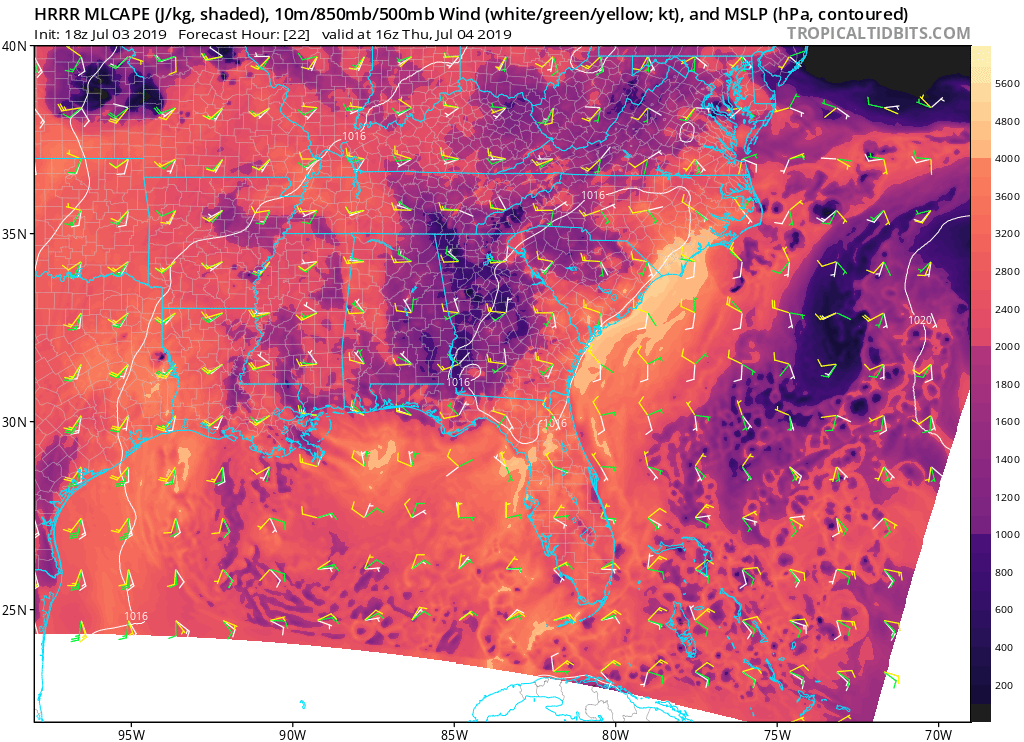 That’s a lot of fuel to the fire folks. If you notice, the highest amounts are near the coast, which is where we have outlined the greatest risk of some severe storms. Not all storms will become severe, but there will likely be a number of them, especially in the eastern half of the forecast area. You’ll wanna stay tuned tomorrow, especially if you have outdoor plans, because conditions could really go downhill in some areas.

Make sure to stay tuned for the latest in significant weather information and severe weather coverage on our Facebook page and through our free mobile app available for Android devices, We hope to expand to IOS in the future. https://carolinawxauthority.com/mobile-app/

From we here at East Coast Weather Authority, we hope you will stay safe and have a wonderful Independence Holiday.