The rest of January cold see some momentary thaws, but nothing really extended. Multiple cold shots and Arctic air sill spill out of the Arctic and into the Upper Midwest and Plains. This cold air ends up on the East Coast, as the coast will continue to see sub freezing temperatures.

Using past winters where the ENSO was neutral, or “La Nada,” data was found similar to January and February of 2014, 1994, and 2002 since these were previous neutral winters.

Data obtained was below for temperature anomaly climate zone : 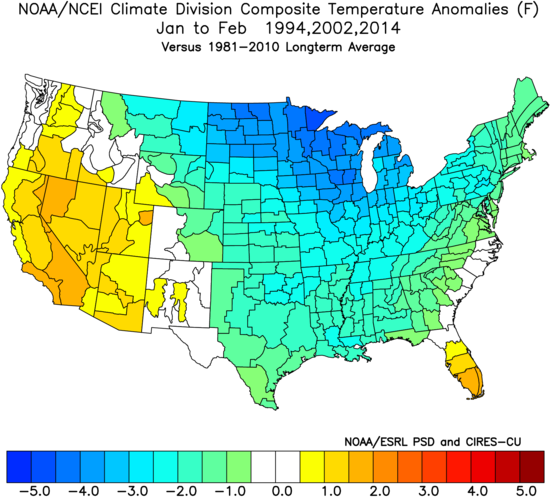 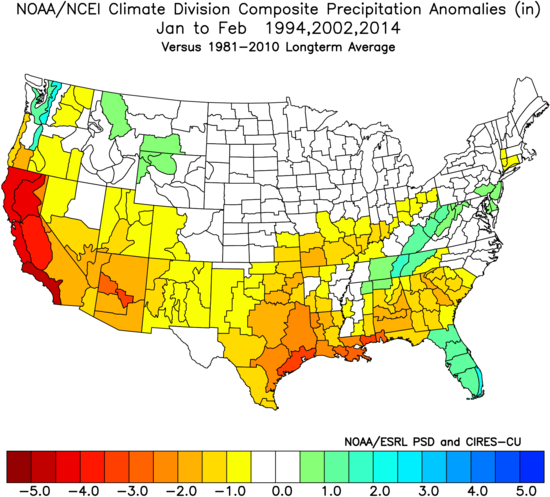 First image is the temperature anomaly for Jan-Feb of similar previous years to this year. Most of the cold comes from the Upper Midwest. This provides just enough air for ice storms along the Mid-Atlantic and even the South.

Second image is the precipitation anomaly (liquid). It appeared dry across much of TX and LA, but especially CA as they could be facing severe drought conditions once again. This again will be due to a ridge out west, keeping the region warm and dry.

For the precipitation pattern in the Southeast, this could signify an active storm track considering FL and the Mountains will be “wetter” than usual. All the dry areas in GA, AL, and SC I would ignore, or throw out.

Hang on tight and stay warm!