Intense and potentially record-breaking heat could be on the way for many areas this week and especially heading into this weekend.

A ridge of high pressure centered over the Ohio Valley initially, and migrating into the Northeast later this week into this weekend will bring about oppressively hot and humid conditions to the majority of the nation east of the Mississippi River.

Already, temperatures are nearing, if not exceeding the climatological daytime highs for most areas, and the heat will really ramp up for the Carolinas and Lower Mid-Atlantic as we head into Wednesday. We’ll see 90’s fairly widespread, with a few spots reaching at or just above 100 degrees Fahrenheit, and heat indices will be even higher. Take a look at modeled highs from the 12z GFS for Wednesday afternoon: 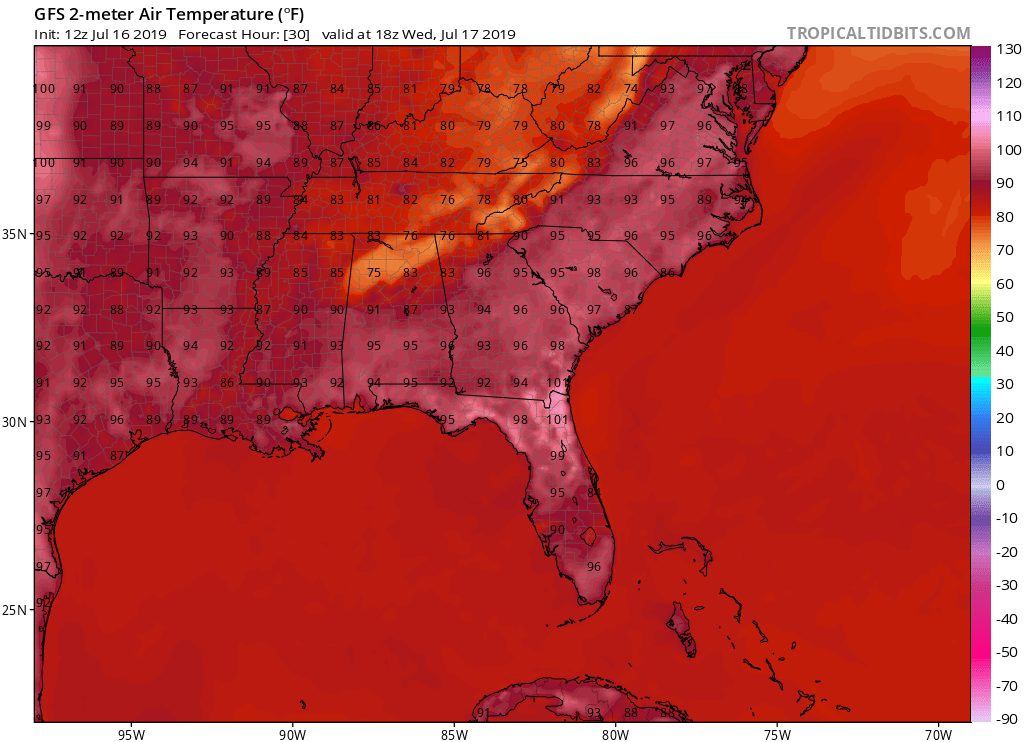 We can’t show the European daytime highs, however they are slightly warmer and suggest a few areas, particularly Southwest South Carolina may be susceptible to the 100 mark. Precipitation increases for some later Wednesday into Thursday:

Now Thursday could still be rather uncomfortable, but we will see remnant moisture from tropical depression Barry swinging through and providing us with a chance of scattered showers and thunderstorms. This may keep actual high temperatures somewhat lower in some areas that see shower and thunderstorm activity, but humidity levels will be rather oppressive regardless.

Friday the heat cranks back up similar to Wednesday in extremities with temperatures back in the 90’s to near 100 degrees or more for some locations in the Carolinas and Lower Mid-Atlantic. Here’s another look at your GFS daytime highs for Friday: 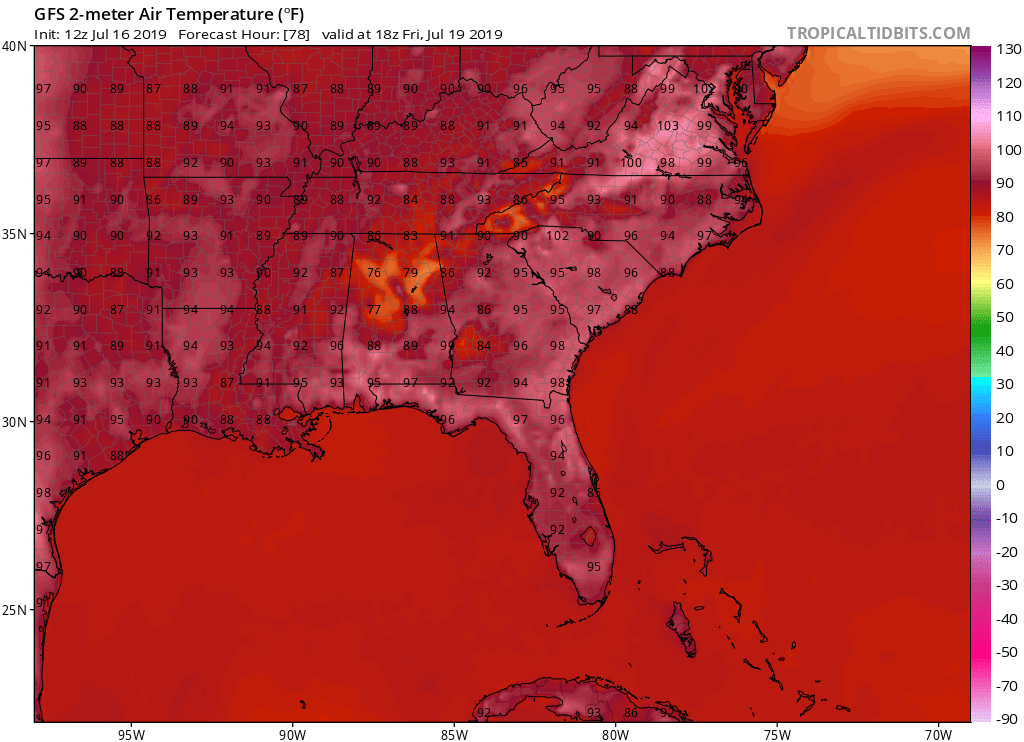 Indications suggest that Saturday into Sunday could be the most extreme in terms of daytime heat and heat indices, but less extreme on how widespread it will be. The Carolinas as a whole will remain fairly hot, but Northern North Carolina into Virginia is where temperatures will be the most excessive, and possibly record breaking for some areas in terms of high temperature numbers. The heat indices will surely skyrocket to dangerous and unhealthy levels for many in this region, which is where we have highlighted the most intense area of hot temperatures and realfeel for Saturday into Sunday. 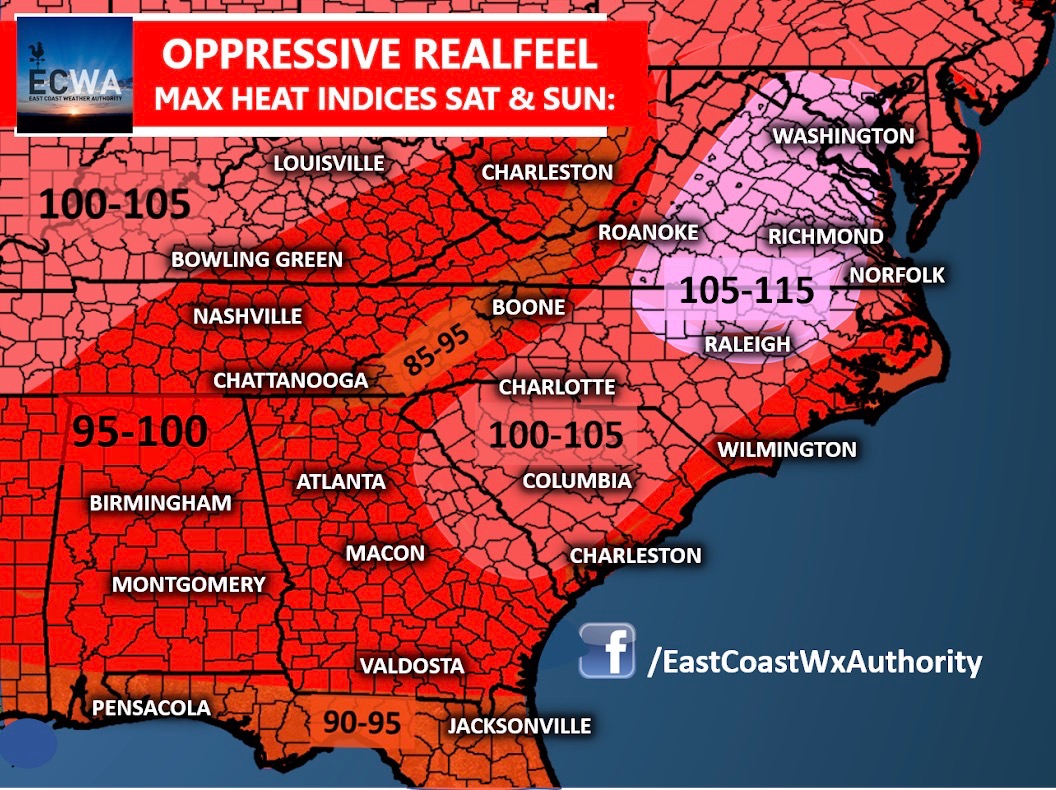 A few areas may be lucky enough to see some showers and storms this weekend that could briefly dent the heat, but not everyone will and best chances will remain in the Western Carolinas, and especially west of the Appalachians.

Do not take this heat lightly if you live in the Carolinas, and especially Northern North Carolina into Virginia this weekend. Proper hydration, limiting your time outside, and pacing yourself in outside work and activities could be vital to your physical health and well-being, and we encourage you to practice safety guidelines in the event of this heatwave.

The National Weather Service has a rather efficient set of safety guidelines available in the graphic below for you to examine: 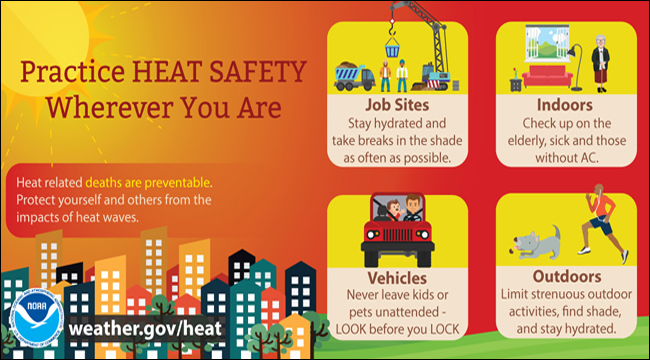 By early next week we will see a pattern change that will replace the ridge responsible for our heatwave with a trough that will knock down those high temperatures considerably, and will also lead to increased heavy shower and thunderstorm activity. More on that later.

Make sure to stay safe and stay up to date with the latest here on the website, Facebook, and Twitter page. We will keep you informed.