Two tropical depressions, Thirteen east of the Lesser Antilles, and Fourteen near the coast of Central America are on track to affect the Southeast early next week. In addition, a third tropical wave which emerged off of Africa has potential to be a named storm down the road. The two depressions will do battle to see which one gets named “Laura” first. The consolation prize is the name “Marco.” Someone in the other room please shout, “Polo!” In addition, there’s a very good chance the third area of concern eventually gets the name “Nana,” getting us more than halfway down the list of names before the end of August!

We did some research and found that the potential for two storms affecting the Gulf states would be unprecedented. One would think the two could form into a megastorm, and a quick search of the internet shows that those rumors are already flying. However, we believe the physics just aren’t there for that to happen. It’s more likely that one storm will take precedence and influence the other, perhaps causing it to weaken. 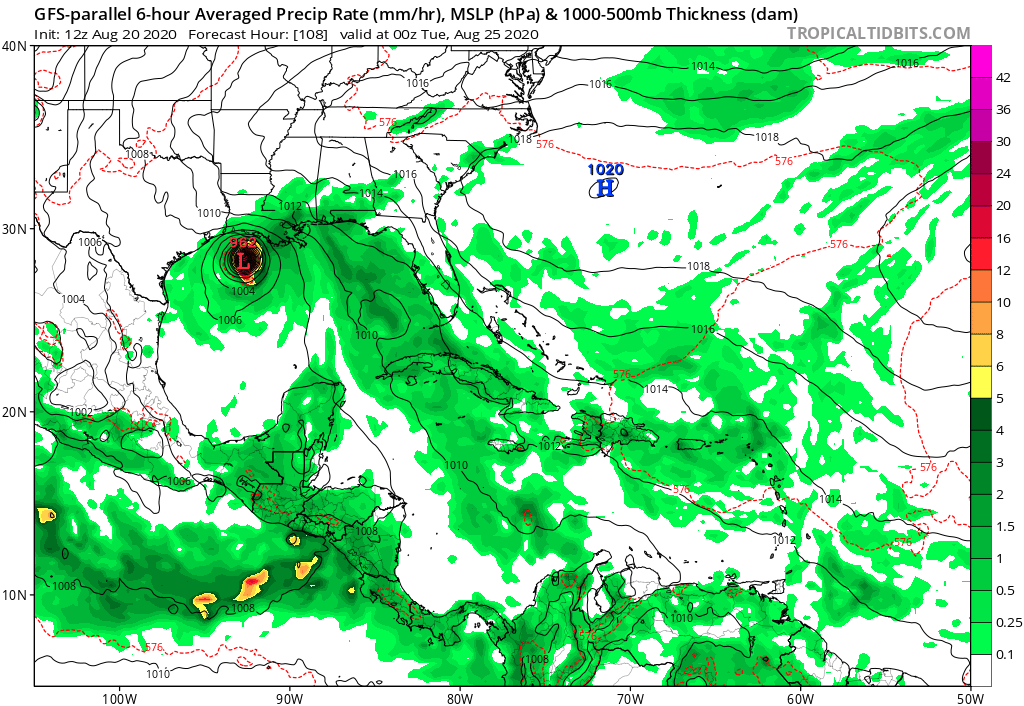 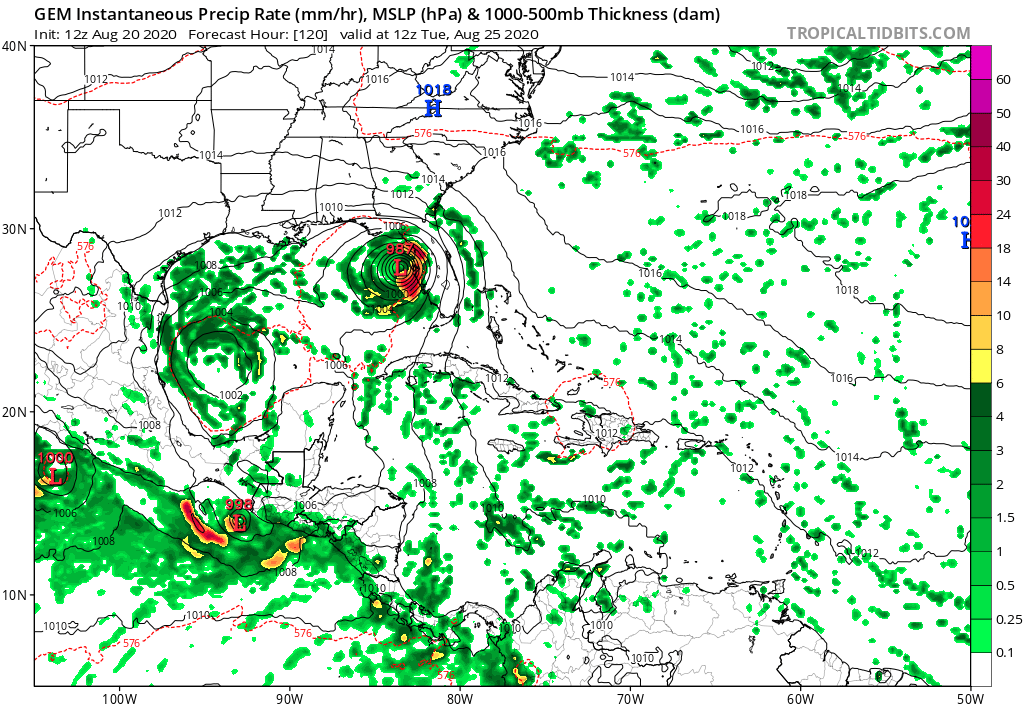 Early indications that Tropical Depression Thirteen was set to strengthen into a powerful hurricane and threaten the Florida East Coast have backed off some, but still remain possible, but there will be a lot of landmines for the depression to navigate. First, dry air and a weak upper low to the northwest of the system have created somewhat hostile conditions for strengthening. But tropical storm conditions could still impact the northern Leeward Islands, the Virgin Islands, and Puerto Rico Friday night into Saturday if the system can overcome them.

Down the road, a potential track near Hispaniola could also wreak havoc on the system. But model consensus has the system staying north and getting into a more favorable position to strengthen near or over the Bahamas. With water temperatures running well above average, some signals are there for rapid intensification. But right now, it is a little early to make that call. We mentioned two days ago that we thought was possible, and we aren’t backing down from that stance. While that doesn’t appear likely yet, we want you to remain vigilant of the possibility of it occurring east of Florida on Sunday and into Monday up until potential landfall in South Florida or over the Keys. It doesn’t look nearly as likely that the storm will curve up the East Coast like Dorian and Matthew did as strong high pressure is set to build westward over the weekend.

After potential landfall, solutions diverge, and a lot will have to do with how strong the system can get. Some solutions show it weakening steadily over Florida, while others showing it entering the eastern Gulf and turning northwest then north around the periphery of the high. The Gulf of Mexico is a prime spot for strengthening in most cases this time of year, but this time we have another potential system which could blow this forecast up in our faces. But we are assuming this system develops and survives a potential bout with Hispaniola and Cuba or this won’t happen. 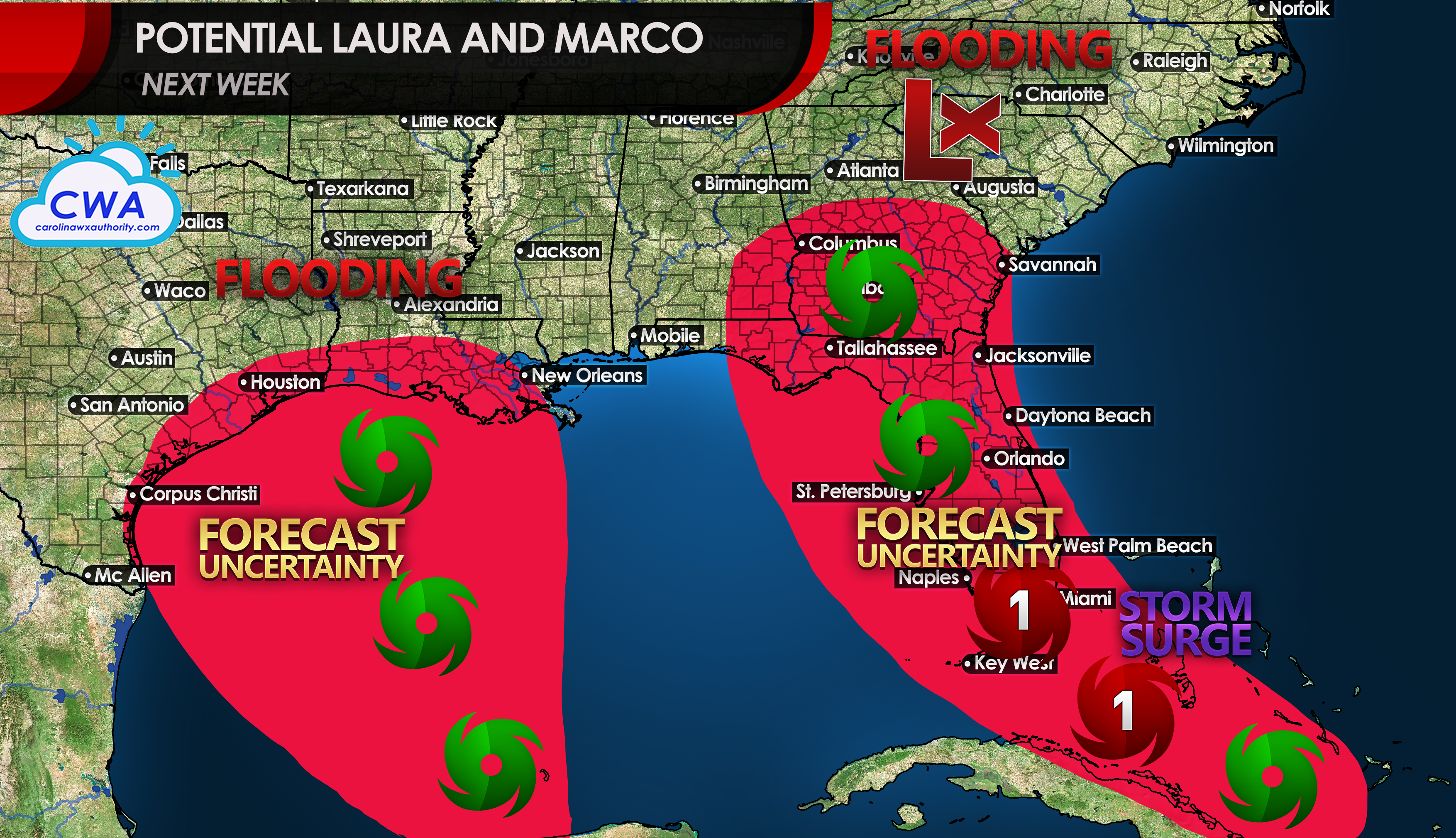 Now Tropical Depression Fourteen in the western Caribbean looked like it would struggle to develop as quickly as Thirteen up until this afternoon. Conditions are actually favoring that this one may win the race to being upgraded to Laura as outflow has improved with an upper level anticyclone taking over. Fourteen has really good potential to strengthen on Friday, but there is one caveat: the system could spend some time over northeastern Nicaragua and eastern Honduras, which would hamper its chance at intensifying. That would also be very bad for residents in those nations, with flash floods worsening with a more inland track. Some models show that happening, while others have the core of the storm bouncing off the coast and spending 24 hours or more over prime real estate for hurricanes: the northwestern Caribbean Sea. We will know more in 24 hours, but that is the first fork in the road for Fourteen. If it doesn’t spend time over land, it could intensify all the way to hurricane strength before a potential date with the Yucatan Peninsula later in the weekend. The system is expected to emerge north of the Yucatan by Sunday afternoon into a very warm body of water, but also in the face of some wind shear from a large trough to its north. At that point, it could be weak, or it could hold together well and enter the southern Gulf with a lot of momentum.

A weakened storm is more likely to turn left and aim towards northeastern Mexico or even sit over the southwestern Gulf in a weak steering environment early next week. A more in tact storm will have to be watched with a lot more concern for residents from the middle Texas coast to Mobile Bay, keying in on Louisiana. While one would look at a storm like this as one with great potential to intensify quickly, we feel that wind shear could keep that from happening. Also, and you’ll see on the water vapor image above, that a lot of dry air on the western side of the trough could infiltrate Fourteen, causing a disruption of the core of the storm and weakening. Also, if Thirteen enters the Gulf and is a larger storm, that will negatively impact Fourteen. So there are a ton of unknowns at this point and all we can talk about is potential at this point. Let’s say the odds of both storms becoming hurricanes aren’t bad, but the odds of both being major hurricanes are super slim. Also, storms in their early phases like these will bring a lot of uncertainty to the table.

And finally, we want to let you know in the Carolinas that a lot of tropical moisture is headed your way. The trough pulling moisture northeast from the Gulf Friday into the weekend will set the stage for a very wet 7-10 day period. If Fourteen comes up Florida, that moisture will be headed our way. I have included the 12z GFS model that shows potential for 2-4 inches of rain through next weekend. However, mountainous areas could see more. This forecast is subject to change quite a bit.

We urge you to stay tuned to what will be several changes to the forecast. The good news is that we still have some time to track these systems before they affect the U.S. The bad news is that things can quickly change with the waters offshore being so warm. These two are just the beginning of what could be a super active stretch of tropical activity that carries into October.

We will have more videos on our YouTube channel, and expect to stream live as these systems make potential impact to U.S. locations.