The Atlantic continues to awaken this week with a string of disturbances lined up from the Eastern Caribbean back to the far Eastern Atlantic a few hundred miles southeast of Cabo Verde.

Our first item of interest is a rather unimpressive wave in the Eastern Caribbean. Invest 95-L will head northeastward to eventually affect Puerto Rico with some heavy rainfall as well as portions of the Eastern Bahamas heading into later this week. The trek over excessive land as well as impressive wind shear is likely to be a notable hindrance of this somewhat anemic tropical disturbance becoming anything too significant before eventually reaching Atlantic waters off the East Coast. However, we are keeping an eye on this system, and so is the National Hurricane Center. Their latest tropical outlook from 8:00 PM this evening leaves the chance of cyclonic formation at a mere 10% probability through the next 5 days: 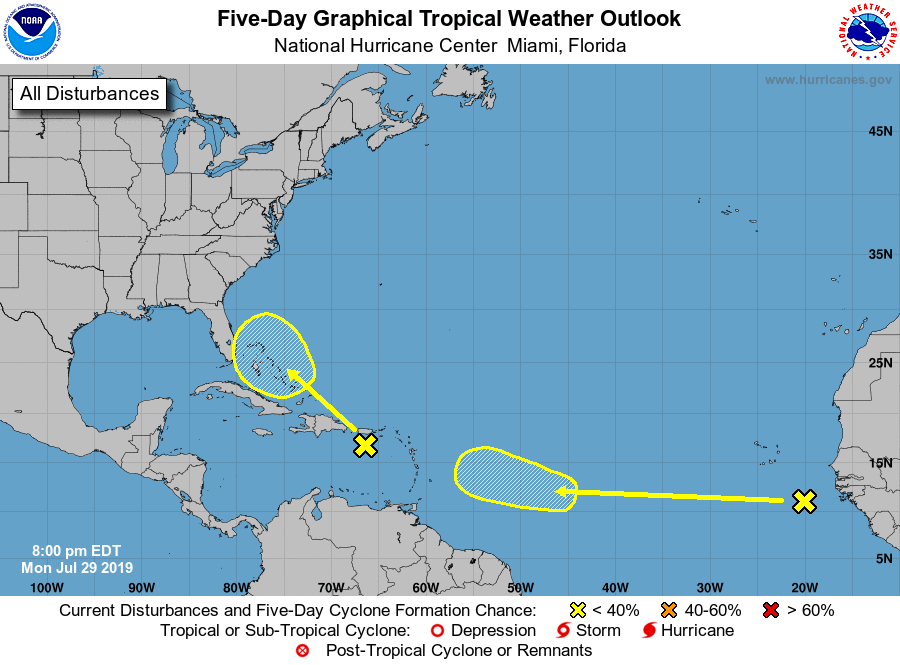 If Invest 95-L does in fact survive on its progression into the Northwest Atlantic closer to the East Coast, it’s certainly no guarantee that we see a track close enough to the Carolinas for any notable impacts. Most modeling keeps the system out to sea in a re-curving fashion before it’s eventual demise. However, there is still a slight chance we see this system track along or at least closer to the Carolina coast. Check out the latest GEFS ensemble animated forecast highlighting the potential low pressure locations this weekend:

However, the concern doesn’t end here. As previously mentioned, our string of disturbances stretches back to Cabo Verde with an item of somewhat more interest emerging from that region this evening and indications from computer modeling would suggest this wave may become somewhat stronger and more organized then its Caribbean predecessor this week. The first 5-day outlook from the National Hurricane Center to mention this particular wave already places the cyclonic formation probability at 20%. Take a look:

In fact, if we take a look at the latest run of the European deterministic forecast model today, we find a more stout looking cyclone developing within the next few days and making a run into the Northwest Atlantic by days 9 and 10. Now this is not a forecast, but just what current model data projects for the progression of this next potential cyclone:

Of course, the specific long-term intensification and progression of this wave, and if or when it may hold an impact for anyone on the East Coast is unable to be determined this early on, as any model guidance this far out is good for no more than mere speculation on that idea.

We are drawing near to the most active timeframe of the Atlantic tropical season which climatologically has been known to occur from August through October with the end of the season in late November. Make sure to stay tuned to Carolina Weather Authority for the latest short and long range tropical outlooks and our social media pages on Facebook and Twitter where we also provide significant alerts during tropical systems that impact the Carolinas.