WHY MODELS ARE RARELY ACCURATE

There have been many of times where we see a post and it’s a model image, and it’s one of the worst storms known to man with impending doom. This gets a lot of likes and shares, and of course drives up the number of clicks on the post. However, not all model images are 100% accurate as far as what happens in reality. The GFS for example, can waffle between a landfalling tropical system and the system having no effect on land at all. Take Low Investigation 96, or Invest 96L for example which is currently out in the Atlantic.

One previous run of the GFS had a landfall somewhere in the Carolinas. Also a central low pressure of 979 mb. This would likely be a strong tropical storm. However, the forecast pressures vary for this tropical system for all of the below images. 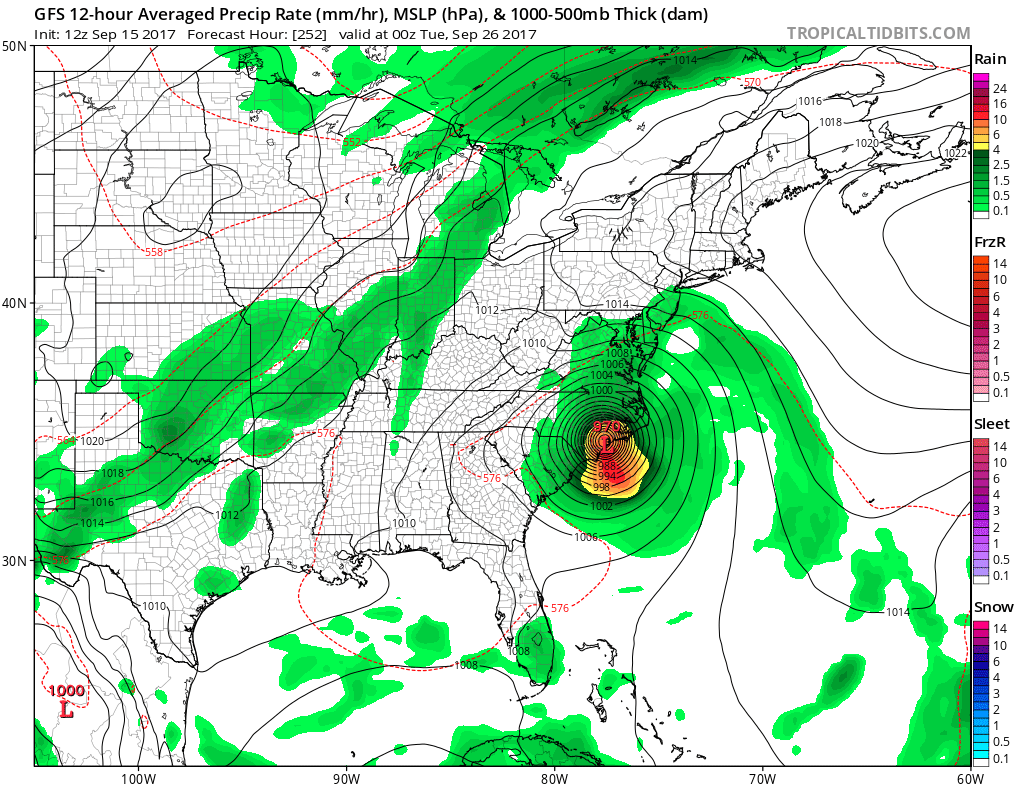 Let us now look at the 00Z run Thursday night of the GFS. This model run puts 96L out to sea, which is a far more different scenario than making landfall. This again is a pretty big difference for only a day’s difference in examining to models. 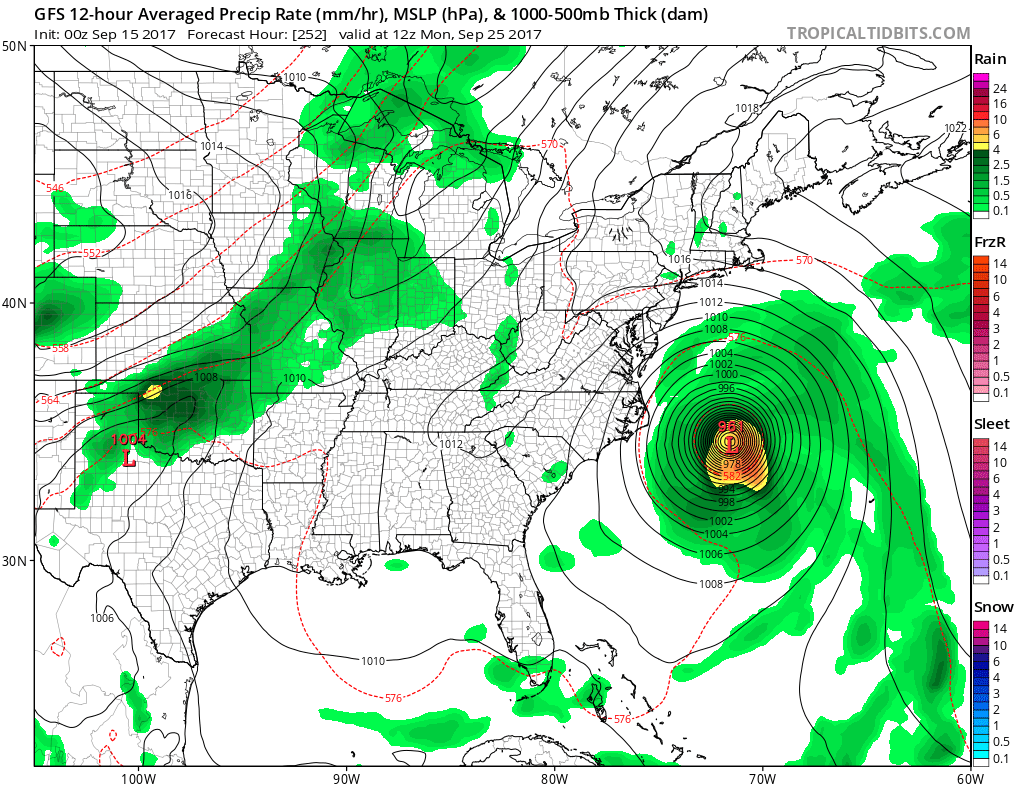 Also, earlier this week, the GFS hand a landfalling hurricane in Florida. This of course would have caused panic and confusion for the residents of Florida, since they just had to deal with the damage and hardships from Irma. We here at East Coast Weather Authority try to avoid this kind of behavior. We are committed to bringing accuracy rather than hype. Here was the GFS showing the hurricane hitting Florida which was a model run from earlier: 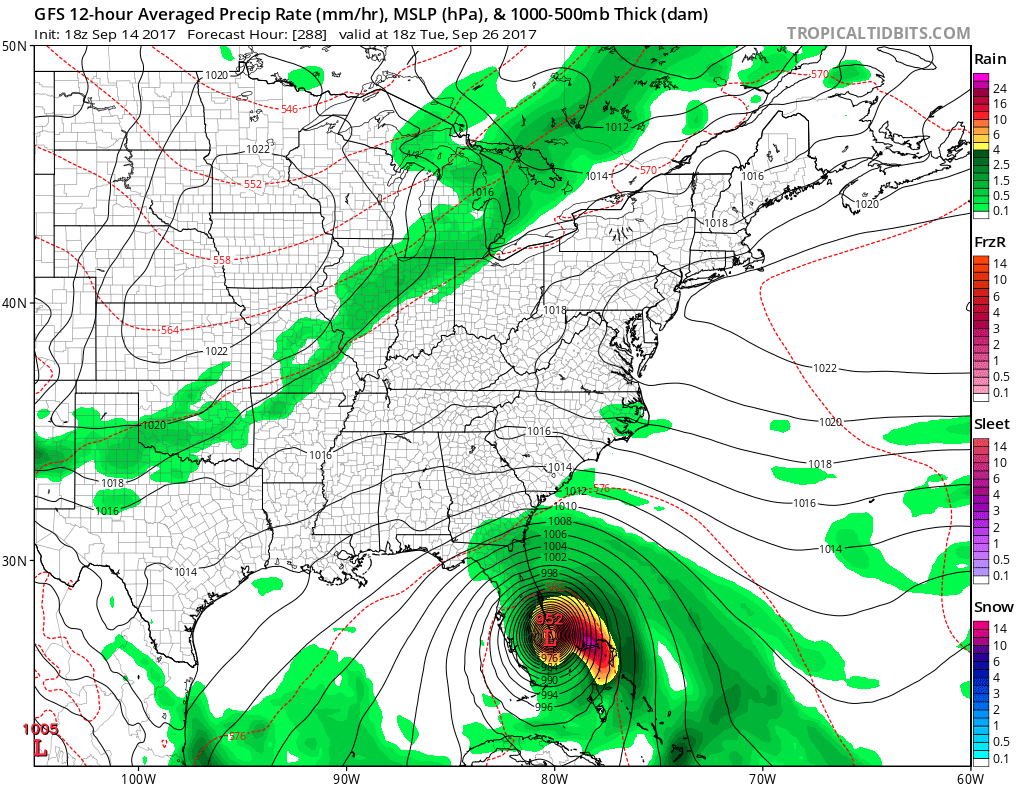 And yet here is another model run showing a landfall in the Carolinas, namely South Carolina. This model just cannot be trusted, especially when a tropical system is a week or more away, or even less, from coming close to the US. These models for far out in the future need to be taken with a grain of salt. Here is yet another example from an earlier model run:

Weather models are essentially computer algorithms that only know as much as we tell them. So if they are fed bad input, which is always possible, then garbage in = garbage out. That would mean that occasional bad data fed to a computer would result in an inaccurate model image for the forecast time in question. One reliable source for weather information is always NOAA, as they are the official source and part of the US government. The National Hurricane Center should always be used as official information for hurricane forecasts, and also your local National Weather Service office. Find the latest forecast from the NHC here.

Certainly, when the time frame draws closer for the event to unfold, models will then have a MUCH better grasp on a final outcome. Normally, but not always, the hi-resolution models such as the NAM or HRRR can have a fairly decent grasp on what will be CLOSE to unfolding, However, major global models such as the Euro and GFS are better than hi-resolution models since they can better pick up on large atmospheric circulations, such as ridges of high pressure and troughs of low pressure.

With this knowledge, happy forecasting! We will be continuously adding to our models page here on the site. Find them at https://carolinawxauthority.com/models.